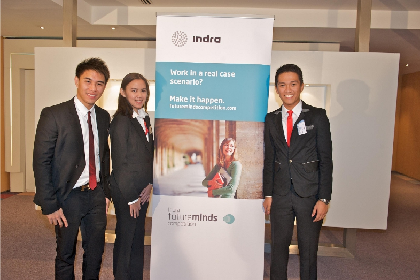 08 May 2012 – The Philippine Embassy in Madrid reported to the Department that Erwin Soleta, Maria Katrina Volante and Benedict Ivan Andrade, students from the University of the Philippines (UP), won the grand prize during the II Edition of the Indra Future Minds Competition on 26 April 2012 in Madrid.

The international competition for students sponsored by Indra, aims to find solutions to the challenges faced by the business sector, such as globalisation, multiculturalism, and collaborative networking. The Philippine participants earned their victory by resolving the final Smart Cities case which is based on an actual Indra project for the City Government of Barcelona.

Indra is a global technology, innovation and talent company with stakes in the transport, energy, healthcare, financial services, security and communications sectors worldwide.  The company, which was established in the town of Aranjuez in Spain, is now considered as the leading technology provider in Spain and one of the leading multinational firms in Europe and Latin America.

The winning students will be given the opportunity of joining the IT multinational upon completion of their studies. This will provide the students with an international experience from the onset of their professional careers, thus developing the global profile that companies currently look for.

The UP students bested ten (10) other participating teams from Spain, Brazil, Mexico, Colombia, Argentina, Czech Republic and Perú at the final phase of the competition.