In April 1951, the Philippines sent former Supreme Court Chief Justice Manuel V. Moran as its first Ambassador Extraordinary and Plenipotentiary to the Kingdom of Spain. As of this time, there have already been fifteen (15) Philippine Ambassadors to Spain.

On 03 February 2003, bilateral relations between the Philippines and Spain was raised to a higher level when President Gloria Macapagal-Arroyo signed Republic Act 9187, declaring June 30 of each year as Philippine-Spanish Friendship Day. The date coincides with the anniversary of the end of the Siege of Baler where the last Spanish colonial forces held out for 11 months against Filipino revolutionaries. As a gesture of friendship, then President Emilio Aguinaldo granted the survivors safe passage to Manila, en route to their return to Spain, in recognition of their valor and loyalty.

On 30 June 2011, the Spanish Congress of Deputies, through Speaker Jose Bono Martinez, made a historic Institutional Declaration on the occasion of the 9th Philippine-Spanish Friendship Day. A similar declaration was made by the Spanish Senate, through Senate President Pio Garcia-Escudero Marquez, a year later.

Copies of the treaties can be viewed at the Philippine Treaties Online website.

In 1997 under the guidance of Ambassador Isabel Caro Wilson, the Philippine Government purchased a 1,200 square meter property at Calle Eresma 2, corner Calle Guadalquivir, in the prime residential district of El Viso, where other Embassies were also located. Originally, a fifty-year old two-story manor house used to sit on the property until it was demolished to make way for the construction of the new chancery. After more than a year´s work, the new Embassy Chancery was inaugurated by then President Fidel V. Ramos in August 1998. The Chancery has two access gates – the Eresma gate leading to the first floor offices and the Guadalquivir gate leading to the Consular Office. 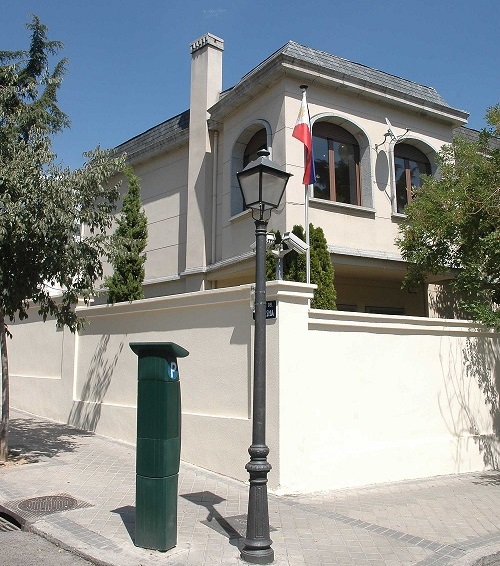