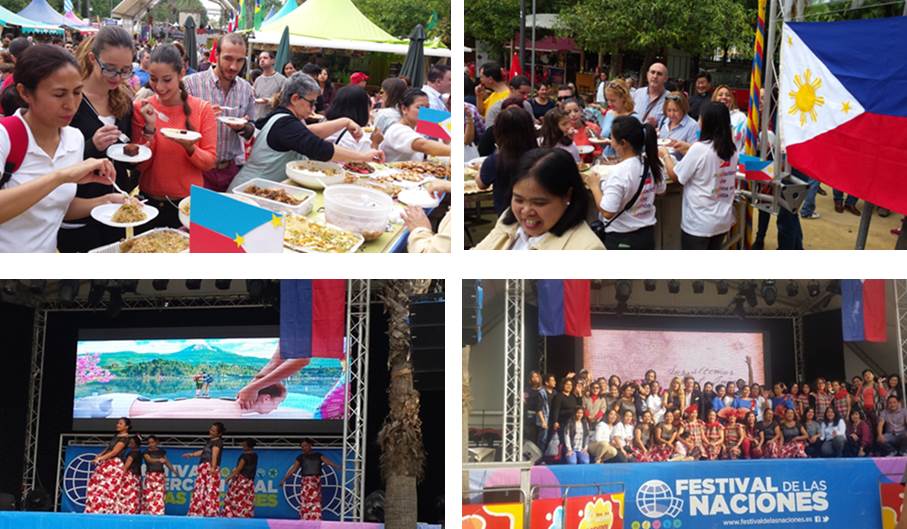 “Philippine Day” began with the projection onstage of Philippine tourism videos, while an array of Filipino dishes and delicacies were offered to the public.

Among the dishes that the Spaniards enjoyed were adobo, pancit, lumpia, and kaldereta.  They also went for Filipino delicacies such as biko, cassava cake, sapin-sapin, puto and palitaw.

Members of the Filipino community then performed folk dances in a medley of Itik-itik, Tinikling, Bulaklakan, Pandanggo sa Ilaw, Paru-parong Bukid, and Habanera.  This performance was capped by a speech by Consul General Bidon, a.h., who spoke about the strong historical and cultural ties that bind the Philippines and Spain.  “Philippine Day” ended with the outdoor screening of Los Ultimos del Imperio, a documentary on a group of Spanish soldiers who fought in the Siege of Baler.

Festival de las Naciones is organized by a private company which also goes by the same name.  It is a multicultural event that showcases products and cuisine from all over the world.  The festival started on 19 September and will last until 2 November.  It is currently being held in Seville’s Prado de San Sebastian Park.  Admission to the festival is free of charge.