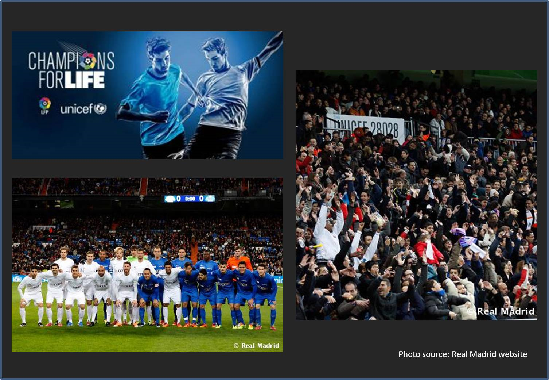 02 January 2014 – The Philippine Embassy in Madrid reported that the Spanish Professional Football League and the Spanish Committee of the United Nations Children´s Fund (UNICEF) organized “Champion´s for Life”, a charity football game whose partial beneficiaries are the UNICEF programs for the victims of Typhoon Haiyan, on 30 December 2013 at the Santiago Bernabeu Stadium of Real Madrid. The event was extremely successful with a total attendance of about 50 thousand.

Philippine Ambassador to Spain Carlos C. Salinas and his wife, Mrs. Isabelita Salinas, attended the game as guest of honors together with the President of UNICEF Spanish Committee, Consuelo Crespo Bofill and the President of Real Madrid Football Club, Florentino Perez.

During the game, there were repeated announcements about the Philippines, calling for support for the country and its people, especially for the children. The audience was invited to pledge their support by dialing in to UNICEF 28028, where each call would represent a donation of 1.20 euros. By the end of the game, they had received 40 thousand calls.

In the end, the charity match raised a total of 550,000€ which will be divided between the beneficiaries of the Spanish UNICEF Committee and the Spanish Professional Football League.