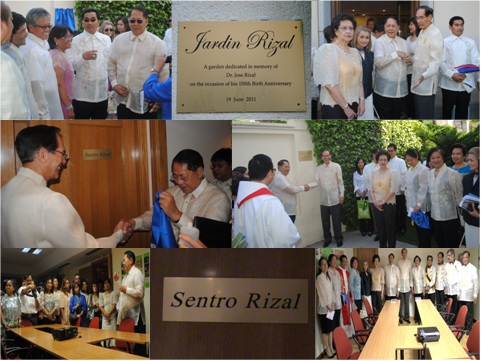 Pictures of the inauguration of Sentro Rizal and Jardin Rizal

Senator Edgardo J. Angara, together with Philippine Ambassador Carlos C. Salinas and in the presence of Department of Labor and Employment Secretary Rosalinda D. Baldoz, inaugurated the Sentro Rizal temporarily housed at the Philippine Embassy in Madrid in commemoration of the 113th anniversary of Philippine Independence and the 150th birth anniversary of Dr. Jose P. Rizal.

The Sentro Rizal, the first of its kind in the world, is a repository of all kinds of material relating to the promotion of Philippine history, arts, culture, language and tourism.  One of its main goals is to provide a place where children of overseas Filipino workers can learn about their heritage.  Furthermore, it is envisioned to be a place of research for scholars interested in the Philippines and in the life and heroism of Dr. Jose Rizal.  The establishment of Sentro Rizal is provided for under the National Cultural Heritage Act of 2009.

In his remarks, Senator Angara lauded Madrid PE’s efforts in establishing the Sentro Rizal and noted the timeliness of the launch coinciding with the commemoration of the 150th birth anniversary of Jose Rizal.  He further noted the appropriateness of Sentro Rizal being first inaugurated in this city given the impact of Madrid on the life of Jose Rizal.

Senator Angara also expressed the hope that more Sentros be opened in other cities in Europe, particularly those that have linkages to Rizal.  Another Sentro Rizal is scheduled to be launched at the POLO-Madrid Office before the end of the month.