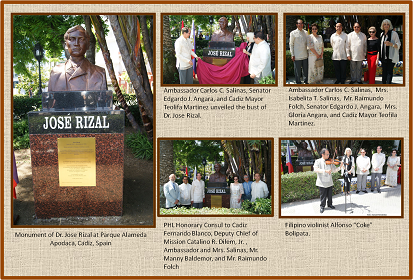 Madrid PE initiated the installation of a Rizal bust in Parque Alameda, where monuments of the national heroes from South America are located, as part of Madrid PE´s efforts to commemorate the bonds of friendship between the Philippines and Spain and to form a closer relationship with the City of Cadiz.

The program for the bust inauguration included speeches by Senator Angara, Ambassador Salinas, and Mayor Martínez and a short performance by known Philippine violinist Mr. Alfonso Bolipata.   It was subsequently followed by a cocktail reception hosted by Ambassador Salinas.

In his speech, Senator Angara emphasized that the installation of the bust of Rizal in Cadiz symbolizes the shared heritage of Filipinos and Spaniards. He further emphasized that it was in Cadiz that the Cadiz Constitution of 1812, the so-called lost Constitution of the Philippines, was written and enacted, which embodied the ideals of Dr. Jose Rizal.

After the unveiling ceremonies of the bust of Dr. Rizal, Ambassador Salinas addressed the crowd by seconding the statement of Senator Angara that the installation of a bust of Rizal in Cadiz is indeed a symbol of the Filipino people´s gratitude to the people of Cadiz who embrace the Filipinos as their own-not just as allies but as kin. Ambassador Salinas referred to the Cadiz Constitution as the very first constitution which governed the Philippines and which up to today has strongly influenced the Philippines´ socio-cultural and political traditions.

As a sign of appreciation for the Philippine´s efforts to develop ties with Cadiz, Mayor Martinez expressed her sincere gratitude for the gift of a bust of Rizal to the City of Cadiz. The Mayor strongly highlighted that it was the very first time in the history of Cadiz that the Philippine Government celebrated its Independence Day anniversary and the anniversary of the Philippines-Spain Friendship Day in Cadiz. The Mayor underscored that the Dr. Rizal bust project in Cadiz was brought up during the Philippine participation in the Bicentennial Anniversary of the Cadiz Constitution celebrations in 2012.

The Dr. Jose Rizal bust was commissioned by Madrid PE from Mr. Raimundo Folch, a Filipino-Spanish sculptor based in Valencia, Spain.   Mr. Folch, who was born in Manila, has won numerous awards for his sculptures including the prestigious Baumel-Schwenck Prize at the 4th Carrousel du Louvre 2011 organized by the National Society of Fine Arts of Paris.

Funding for the commission was provided by the National Commission for Culture and the Arts (NCCA).

The inauguration of the Rizal bust was organized by Post, in coordination with the Philippine Honorary Consulate in Cadiz, NCCA, and the Ayuntamiento de Cadiz, to commemorate 11th Philippines-Spain Friendship Day and forms part of the Embassy´s Mes Filipino in Spain