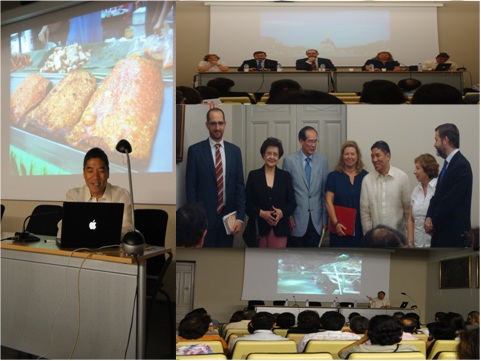 The lecture, entitled Rotten Beef and Stinking Fish: Jose Rizal and the Writing of Philippine History, was enthusiastically received by the audience composed of well-known Filipinistas, enthusiasts of Rizal and the Philippines, members of the Knights of Rizal Madrid Chapter, and the Filipino community.

The title of Dr. Ocampo´s lecture was derived from Antonio de Morga´s description of the food of the indios in his book Sucesos de las Islas which was published in 1609 and subsequently annotated and re-published by Rizal in 1889.  According to Mr. Ocampo, Rizal´s annotations of the Sucesos de las Islas prove that he was the first person to write Philippine history from a Filipino´s point of view.

In his concise and highly informative lecture, Dr. Ocampo shared with the audience rare photographs of Rizal showing him as an ordinary young man enjoying his stay in Europe.  This aspect of Rizal´s life is mostly obscured because of the myth surrounding his persona as a national hero.  He went on to say that Rizal´s greatest misfortune was being named national hero as it masked his true greatness as an individual and as a Filipino.

Ms. Elizalde noted that it is opportune that Mr. Ocampo, as one of the experts on Rizal, to come to Madrid and give a lecture since it is the 150th anniversary of Rizal´s birth.  She further informed the general public of a Rizal exhibit organized by the Biblioteca Nacional which will open in the fall of this year.

Panelist Carlos Madrid also took the opportunity to thank the Philippine Embassy for inviting him to take part in the lecture.  He recollected his experiences on Rizal during his brief stay in Manila as a researcher.

Lastly, Mr. Ponga quoted Rizal by saying that those who are unable to look to past will not be able to get to their destination.  He noted that next year is the 200th anniversary of the Cadiz Constitution which started liberal reforms in Spain and its colonies particularly on how they were governed.  It was his hope that with this anniversary, Spain and the rest of the world will be able to take lessons from the successes and failures of the Cadiz Constitution.