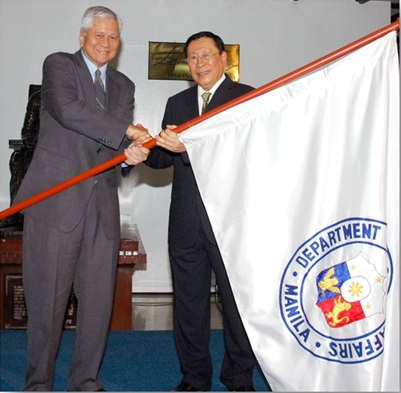 During the turn-over ceremony, Acting Foreign Affairs Secretary del Rosario stated that his foreign policy vision will continue to be grounded on the three pillars of Philippine foreign policy:  national security, economic diplomacy and protection and promotion of the welfare of Filipino nationals.

“On national security, the Association of Southeast Asian Nations (ASEAN) would be the bedrock of Philippine foreign policy.  On economic diplomacy, we will give priority to the directive of President Benigno S. Aquino III to address poverty alleviation thru pushing for measures that are affordable and sustainable to the DFA,” he said.

“On the promotion and protection of the welfare of Filipino nationals, we already have a good system compared to other developing countries, especially with the new Migrant Workers Act.  But we will continue looking at regulations and bilateral agreements to strengthen this protection of our nationals,” Acting Secretary Del Rosario stated.

Acting Secretary Del Rosario has worked for both the private sector and government.  His private sector career spanned a vast field which included insurance, banking, real estate, shipping, telecommunications, consumer products, retail, pharmaceutical, and food industries, among others.  He was a member of the Board of Directors of various firms prior to being appointed as Ambassador Extraordinary and Plenipotentiary of the Republic of the Philippines to the United States of America in 2001.