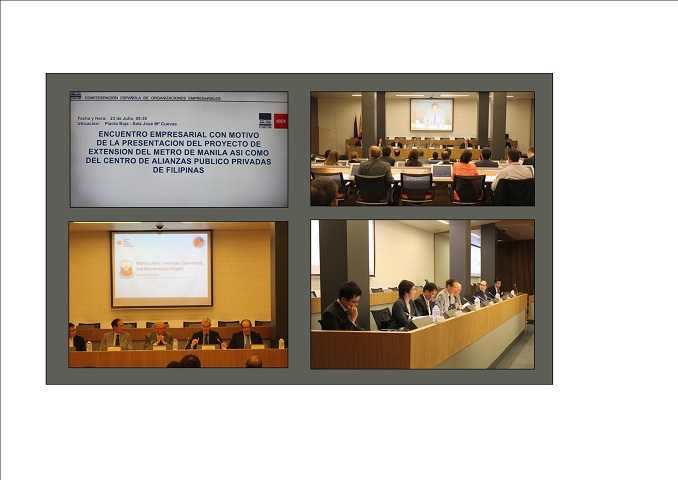 23 July 2012, Madrid – Madrid PE reported to the Department that the Manila Metro Line 1 Extension, Maintenance and Operations Project Investors´ briefing was successfully held in Madrid on 23 July 2012 at the CEOE headquarters (Spanish Confederation of Business Organizations) with about 50 participants from about 27 Spanish companies in attendance. The briefing was organized by Madrid PE and PTIC-Madrid.

Among the major Spanish companies in the transport industry (consultant, operator, contractor and supplier) in attendance were, Metro de Madrid, Renfe, CAF, Indra, Centunion, Ineco, Getinsa, IDOM, Cemex, OHL, Abengoa, AEDIP, Seopan, Talgo, etc. Attached as Annex A is a list of all the Spanish companies present in the briefing.

The guests were welcomed by a remarks from the CEOE President of the Council for Trade Promotion, Mr. José Luis Gonzalez Vallvé, the Director General for Commerce and Investment of the Spanish Ministry of Economy and Competitivity, Mr. Antonio Fernández-Martos, and from Ambassador Carlos C. Salinas.

The Ambassador, at the beginning of his welcome remarks, stressed that progress requires a strong collaboration and the concerted effort of all sectors of society – the government, people, and the private sector.

In the speech of Director General Martos, he highlighted the recent visit of Queen Sofia to the Philippines as an indication of the strong bilateral relations between Spain and the Philippines. He said that he was delighted of the visit of the Philippine delegation and the opportunity given to the Spanish companies to hear about and participate in the pipeline transportation and infrastructure projects in the Philippines.

He further shared that six of ten global players in the transport industry are based in Spain and that Spanish companies are leaders in the sectors that are being promoted under the PPP Program of the Philippine government. He was also glad to announce to the Spanish audience that a PPP project was awarded last year to Spanish company GETINSA, who is part of a consortium who bid for said project.