16 January 2014 – The Philippine Embassy in Madrid reports that it successfully organized, in close coordination with Instituto Cervantes and the National Historical Commission of the Philippines (NHCP), a roundtable discussion on Andres Bonifacio on 15 January 2014 at 1830H at the Instituto Cervantes headquarters in Madrid as part of its activities to commemorate the 150th anniversary of Bonifacio´s birth.

In his remarks, Ambassador Salinas praised Bonifacio for his egalitarian and compassionate beliefs and the ideals he gave his life for and emphasized that the spirit of genuine change that inspired Bonifacio´s call for independence lives within all of us and should be harnessed by Filipinos to propel national development.

NHCP Chairperson Maria Serena Diokno was the guest of honor and main speaker during the well-attended roundtable discussion.  Her lecture centered on the decalogue written by Bonifacio as the founding principles of the Katipunan and the role of women in the organization.

Chairperson Diokno´s lecture was complimented by papers presented by Ms. Carmen Molina Gomez-Arnau and Mr. Antonio Caulin Martinez, well-known experts based in Spain on the Katipunan and its precursor La Liga Filipina respectively. 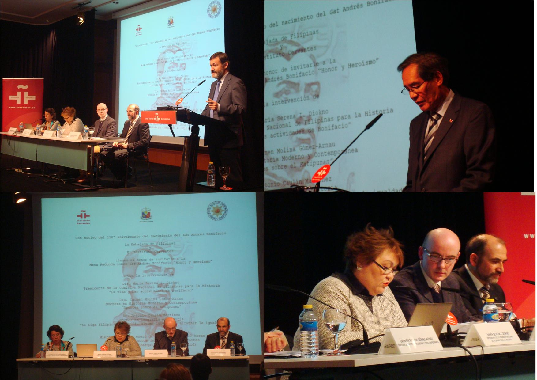 In addition to the roundtable discussion, the Embassy is also organizing a Bonifacio exhibit in cooperation with the Biblioteca Nacional de España (BNE).  The inauguration of said exhibit in the Sala Memoria del Saber of the BNE, which will run until 23 March 2014, will be on 20 January 2014.