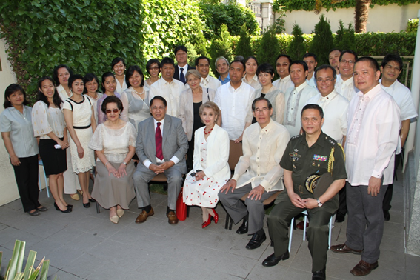 13 June 2013 – The Philippine Embassy in Madrid held a simple flag raising ceremony to commemorate the 115th anniversary of the declaration of Philippine Independence on 12 June 2013 at the Embassy Chancery.

The brief program included the reading of the messages of President Benigno S.  Aquino and Secretary of Foreign Affairs Alberto F. Del Rosario by Philippine Ambassador to Spain Carlos C. Salinas and Minister Catalino R. Dilem, Jr. respectively, and remarks from Senator J. Angara who was the guest of honor of the Embassy for the event. 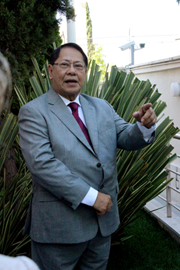 In his remarks, Senator Angara informed the gathering of the recent developments in the Philippines particularly the country´s astounding economic growth and the changes in the Philippine educational system.  He noted that while the Philippines gained political independence 115 years ago it has yet to achieve “economic independence” from poverty and ignorance.  Thus, he encouraged present to continue to support the poverty alleviation goals of the Government through hard work and the education of the youth.