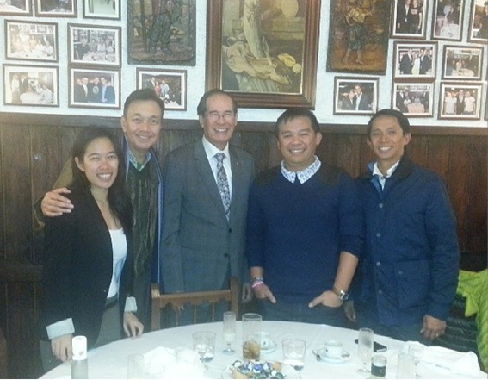 Ambassador Salinas extended the full assistance of the Embassy for the forthcoming FIBA Basketball World Cup, which will be held in various cities in Spain from 30 August to 14 September 2014, through the organization of events and activities leading up to the games to drum up support for Team Gilas and basic information dissemination to the large Filipino community in Spain.

The Philippines will participate in its first FIBA Basketball World Cup in almost 36 years.

Coach Reyes, together with Mr. Castro, Mr. Andrew Teh, Mr. Henson, and Second Secretary and Consul Ma. Carmela Teresa A. Cabreira of the Philippine Embassy in Madrid attended the FIBA Basketball World Cup Draw held on 03 February 2014 at the Palau de Musica in Barcelona.

The Philippines was drawn as part of Group B, together with Croatia, Argentina, Greece, Puerto Rico, and Senegal in the forthcoming FIBA Basketball World Cup which will take place in key cities throughout Spain from 30 August to 14 September 2014.  For the preliminary round, the Philippines will have all of their games in the Andalucian capital of Seville.

After the official draw in Barcelona, members of Team Gilas went to Seville to see the venue for the games and proceeded to Vittoria in the Basque country where they will have their training sessions prior to and after the FIBA Basketball World Cup.