13 June 2012 – The Philippine Embassy in Madrid reported that Ambassador Carlos C. Salinas hosted a diplomatic reception on 12 June 2012 at the Hotel InterContinental Madrid to commemorate the 115th Anniversary of the Proclamation of Philippine Independence and 11th Philippines-Spain Friendship Day.

Justice Secretary Leila de Lima and Senator Edgardo J. Angara, co-author of the Philippines-Spain Friendship Day Act (Republic Act 9187), were the event´s guests of honor.  Philippines-Spain Friendship Day celebrates the magnanimous act of President Emilio Aguinaldo that decreed the Spanish survivors of the Siege of Baler as friends and allowed them safe passage back to Spain. 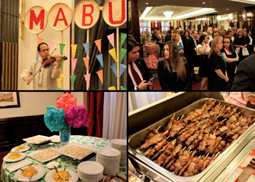 An estimated 350 guests, comprised of representatives from the Spanish Government, members of the diplomatic corps, businessmen, friends of the Embassy, and heads of the Filipino Associations in Madrid, enjoyed the spread of traditional Filipino food and cocktail drinks made from Philippine mango rhum manufactured by Destileria Limtuaco.

In his remarks, Ambassador Salinas elaborated on the theme of this year´s Independence Day celebrations, “Ambagan Tungo sa Malawakang Kaunlaran.” He called on Filipinos to work together towards national development and emphasized the importance of the spirit of “Bayanihan” or working together in achieving this goal.   He also highlighted the events organized by the Embassy to commemorate the declaration of Philippine Independence, Philippines-Spain Friendship Day, and Mes Filipino in Spain. 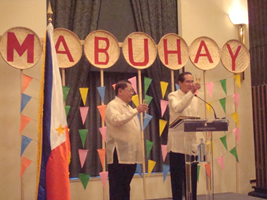 As guest of honor, Senator Angara noted in his speech how much Philippines-Spain relations, in all of its aspects, has grown since the proclamation of Philippine independence and how that relationship is made even more special by its shared heritage and future. He also proudly mentioned the Philippines´ robust economic growth in the past year and expressed hope that economic ties with Spain can be strengthened and enhanced.

To culminate the evening´s short program, world-class Filipino violinist Alfonso Bolipata played the popular Filipino song “Sana´y Wala ng Wakas” by Mr. Willy Cruz.He also serenaded guests throughout the duration of the reception with traditional Philippine music and classical pieces.  Mr. Bolipata is scheduled to have concerts in Casa de Iberoamérica in Cádiz on 13 June 2013 and Casa de América in Madrid on 18 June 2013.

Upon leaving, guests were given Philippine souvenir items such as table runners and coasters made from Philippine fabrics and the ever-popular dried mangoes from Cebu