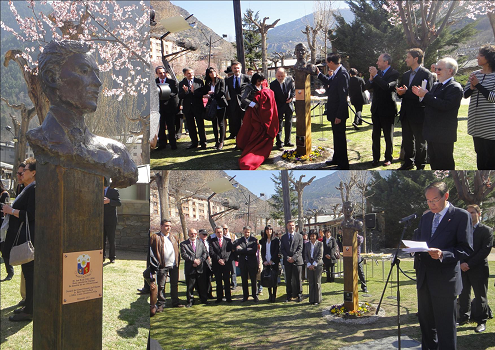 The bronze bust, donated by Philippine Honorary Consul General to Andorra Hans Peter Holbach, was made by the Andorran sculptor Angel Calvente and measures 50x30x216 centimeters.

In his speech, Ambassador Salinas highlighted the importance of Rizal to the Filipino people and how he continues to inspire his fellowmen. He also took the opportunity to express his appreciation to the Government and people of Andorra for the warm welcome and excellent treatment accorded to Filipinos who live and work in the country. There are an estimated 800 Filipinos in Andorra.

On the other hand, Mayor Ferrer acknowledged the significance of the life and work of Rizal. She noted that Rizal serves as an inspiration for all freedom-loving peoples, including Andorra. She also took the opportunity to recognize the contributions of Filipinos in Andorra