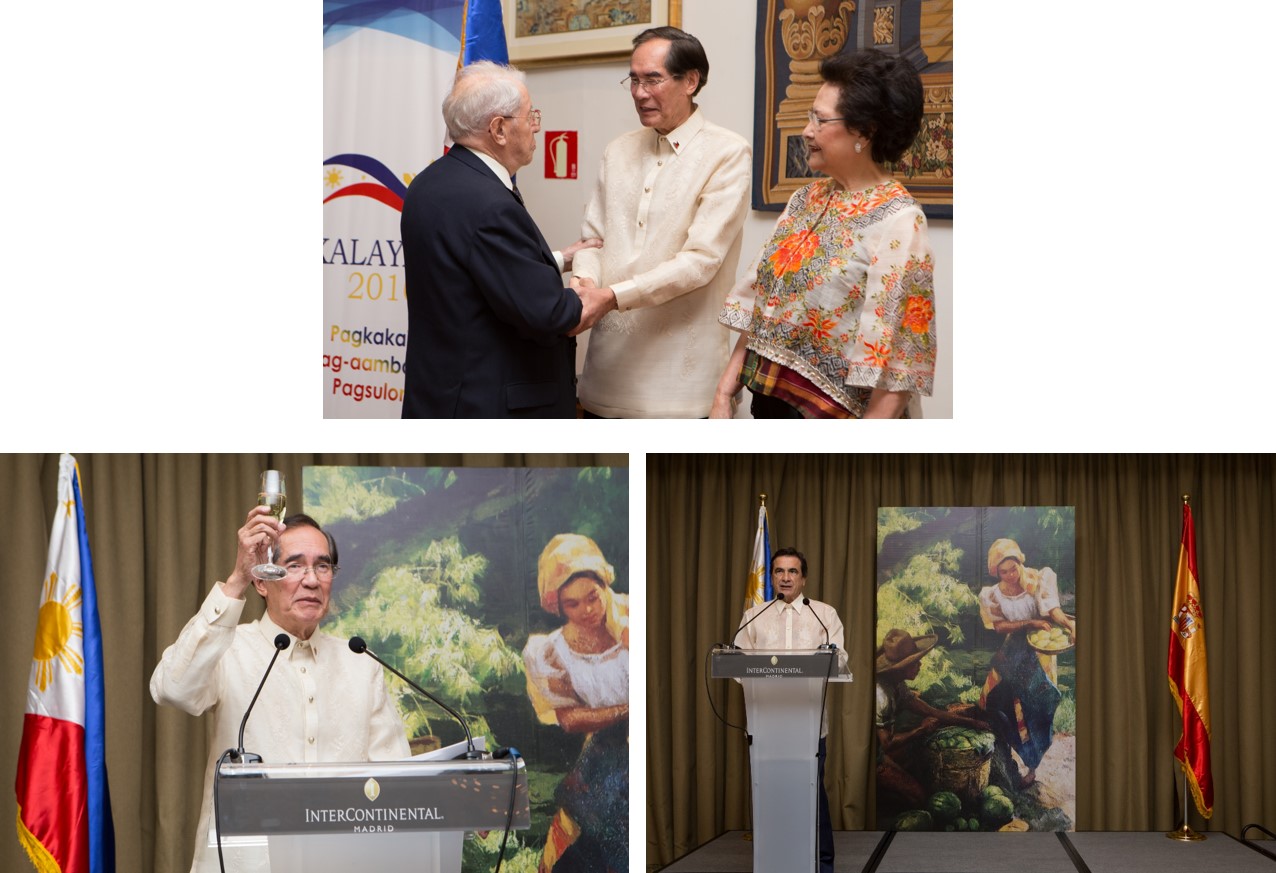 In commemoration of the 118th Anniversary of the Proclamation of Philippine Independence and the 14th Anniversary of Spanish-Philippine Friendship Day, Ambassador Carlos C. Salinas and Mrs. Isabelita T. Salinas hosted the traditional diplomatic reception on 13 June 2016 at Hotel InterContinental Madrid, with an estimated 500 guests from the diplomatic corps, government and private sectors, international organizations, PHL honorary consular offices in Spain, academe, church communities, NGOs, Filipino community associations, and the Spanish-Filipino community in Spain.

Ms. Aniway Adap and Mr. Laurence Aliganga performing the national anthems of the Philippines and Spain.

The evening´s guest of honor, Mr. Fidel Sendagorta Gómez del Campillo, Director General of North America and Asia Pacific Affairs of the Spanish Ministry of Foreign Affairs and Cooperation, highlighted the great extent to which the bilateral relations between the Philippines and Spain in the economic, political and cultural spheres have been elevated during the watch of Ambassador Salinas. He also lauded the efforts of the Ambassador in promoting the welfare of Filipinos in Spain by expanding and improving the Embassy´s consular and assistance-to- nationals (ATN) services through the establishment and re-opening of PHL honorary consulates around Spain. Mr. Sendagorta further confirmed that, as of this date, the Philippines has the most number of honorary offices in Spain. Mr. Sendagorta also recognized the efforts of the Ambassador to further promote Philippine trade and investments in Spain, the results of which can be seen in the continued increase in the exchange of trade between the two countries. He cited, in particular, the biggest Philippine investment in Spain thus far, was the purchase of the Bodegas Fundador and the Torre Espacio by a Filipino businessman.

The theme of this year´s Independence Day Celebration was Pagkakaisa, Pag-aambagan, Pagsulong. Ambassador Salinas encouraged and called on Filipinos to continue working towards unity, collaboration, and progress as a tribute to the heroes to whom we owe our freedom. The Ambassador also recognized the special friendship that exists between Filipinos and Spaniards, which is bound by faith, heritage and lineage. This friendship has been further fortified by Republic Act 9187 of 2002 (which established the annual celebration of Philippine-Spanish Friendship Day) and the Institutional Declarations made by the Spanish Congress and Senate in 2011 and 2012, respectively. He expressed hope that the existing close ties between the two countries will continue to be strengthened and will keep on reaping fruits for the mutual benefit of the Filipino and Spanish people and government. 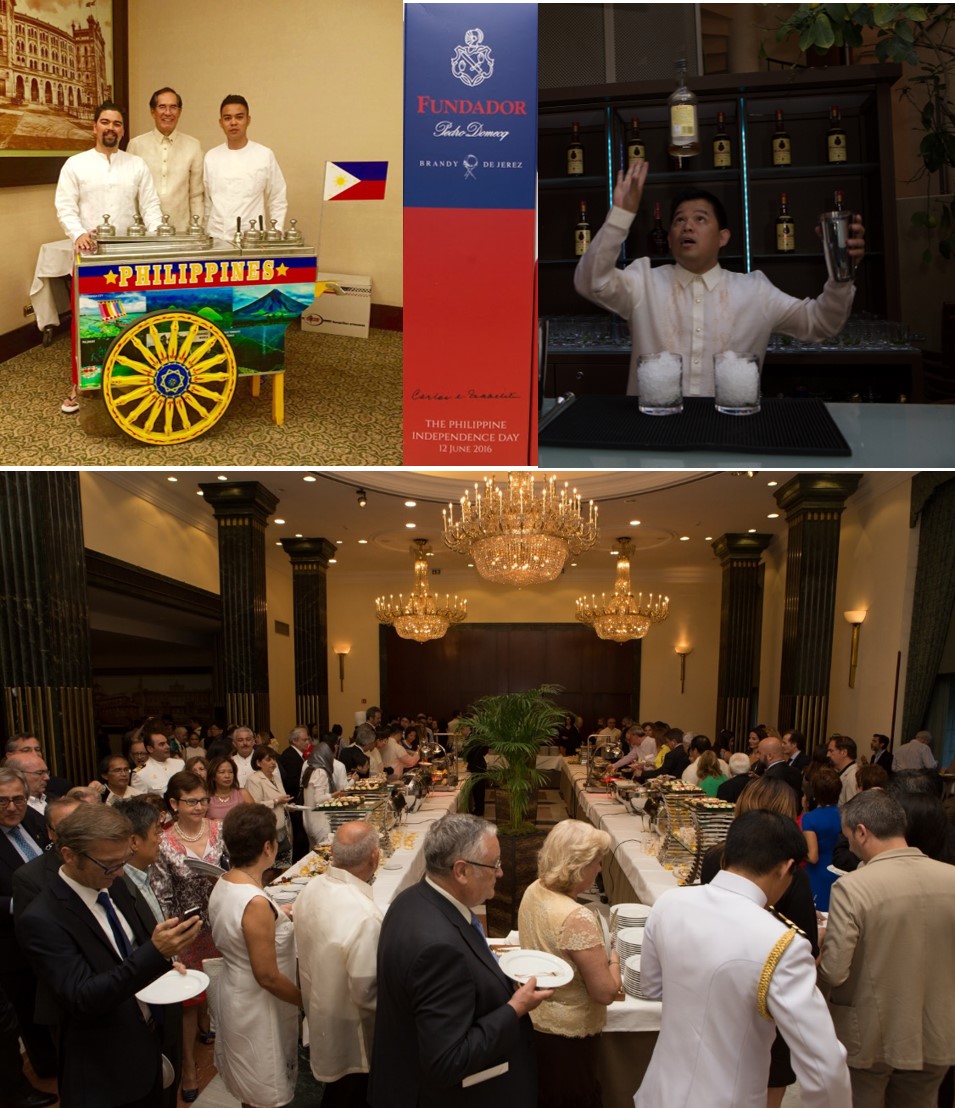 As in the past National day diplomatic receptions, this year´s event also provided an opportunity to promote Philippine culture and gastronomy. The ballroom and the garden were decorated with selected artworks of Filipino painters and buntings to create a more festive ambience. Popular Filipino dishes included sinigang na salmon, lechon kawali, pancit, lumpia, and delicacies, such as tiramisu with mango, fruit salad, and the all-time favorite Filipino-flavored ice cream were served. Bodegas Fundador, United Wineries, and Mahou also offered mojitos and rebujitos, red and white wine, and beer, respectively. Filipino bartender, Dennis Barela, entertained the guests by his unique way of preparing the cocktails. As a token of appreciation, invited guests were gifted with personalized box and bottle of Fundador brandy especially made by and courtesy of Bodegas Fundador.