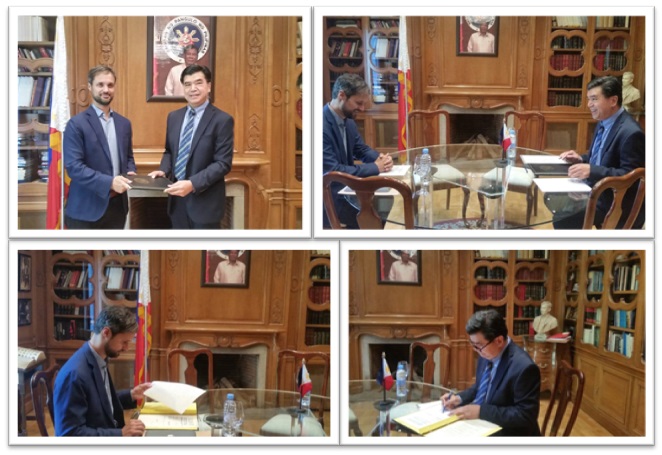 The Embassy´s Chargé d´Affaires and Consul General Emmanuel R. Fernandez met with Honorary Consul Martin on 28 September 2016 at the Philippine Embassy, after the latter received his official accreditation from the Spanish Foreign Ministry, to finalize the opening of the new Consulate.

In his briefing for Honorary Consul Martin, Consul General Fernandez underlined, among others, the importance of rendering prompt and efficient consular services to the Filipino community in the Balearic Islands and of faithfully carrying out his mandate as Philippine representative in that part of Spain. ConGen Fernandez also reiterated his view that being an Honorary Consular Officer is, in many ways, a “mission.”  He, therefore, thanked Mr. Martin for accepting such a mission, and assured him of the Embassy´s support for his undertakings in pursuit thereof.

For his part, Mr. Martin pledged to do his best to promote the interests of the Philippines and the Filipino people in his area of his jurisdiction.   Mr. Martin also underwent a two-day intensive training and briefing on consular, financial and administrative services, as well as on cultural, political, security and labor concerns. Mr. Martin will have jurisdiction over the entire Balearic Islands which include the islands of Mallorca, Menorca, Ibiza, and Formentera.

The Philippine Honorary Consulate General in Palma de Mallorca will be open to the public Mondays through Fridays from 9:30 AM until 13:30 PM.