The Philippine Embassy in Madrid launched an investment, trade and tourism promotion campaign in the Pais Vasco region of Spain.  Ambassador Carlos C. Salinas held a dialogue with Basque businessmen and officials of the  Confederacion Empresarial Vasca (Confebask), a leading Basque business group based in the city of Bilbao, last 21-22 May 2013 in an effort to promote the Philippines as investment and tourism destination for the rich Spanish region.

Ambassador Salinas met with more than 15 business representatives who have expressed interest in doing business in the Philippines.  The Ambassador provided them with information on the improving economic conditions in the Philippines and the current priority sectors.  He also encouraged them to visit the Philippines, not only for business, but for tourism.  He highlighted the various tourist destinations in the country that could be of interest to the Basque tourists. 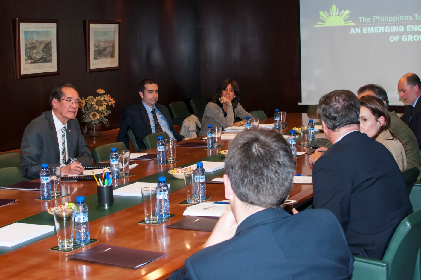 Spain’s Pais Vasco region is one of the leaders in Spain in terms of per capita income.  Industrial activities were traditionally centered on steel and shipbuilding, mainly due to the rich iron ore resources found during the 19th century around Bilbao. Today, the strongest industrial sectors of the Pais Vasco’s economy are machine tool, present in the valleys of Biscay and Gipuzkoa; aeronautics in Vitoria-Gasteiz; and energy, in Bilbao.

The Philippine Embassy in Madrid has conducted similar economic diplomacy activities in Sevilla, Barcelona and Madrid which were well-received by local businessmen.  Post’s efforts are expected to put the Philippines in the radar of Spanish businesses looking for opportunities to expand in Asia.