Philippine Embassy in Madrid and Honorary Consulate General in Barcelona Celebrates Philippine Independence with the Filipino Community in Barcelona, Spain 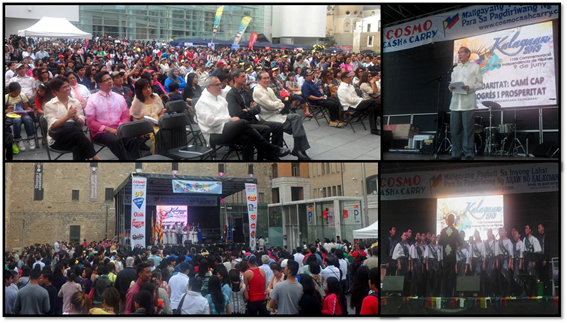 In line with the 115th Independence Day theme “Kalayaan 2013: Ambagan Tungo sa Malawakang Kaunlaran” (Independence Day 2013: Pitching in Towards Inclusive Growth), the Philippine Embassy in Madrid, Honorary Consulate General in Barcelona, and the leaders of the Filipino community in Barcelona worked together to organize this year’s Barrio Fiesta and celebration of Philippine independence.  The event was held on 9 June 2013 in Plaça del Angels, in the central district of Barcelona, and was attended by around 2,000 guests.

In his speech, Ambassador Carlos Salinas called on all Filipinos in Barcelona to bond and work together, emphasizing that unity and teamwork are essential elements to strengthening the community and the nation as a whole.   He enjoined the Filipino community at large and the various associations and organizations to work closely with the office of the Honorary Consulate, now being the Philippine Government’s official representative in Barcelona.   Addressing the Filipinos present, Ambassador Salinas requested them to, “please do not hesitate to take the hands that were mandated to uplift and assist you, dear kababayans. You are in fact, in very good hands.”   Lastly, the Ambassador stressed that the doors of the Embassy and the Honorary Consulate are wide open to the serve the Filipinos in Barcelona.

Barcelona Vice Mayor Marti, on the other hand, cited in his speech the good relations and strong cooperation and partnership between the Philippine government’s representatives in Spain and the city officials of Barcelona.  He hopes to continue working with the Embassy and the Honorary Consulate in strengthening further the relationship between the Philippines and the Catalan region.  He also thanked the thousands of Filipinos in Barcelona for their valuable contribution to the city.

The whole-day event featured performances that showcased Philippine culture and heritage presented by local Filipino talents.   The audience was treated to different folk and tribal dances representative of the various regions of the Philippines, interpreted by the young generation of Filipinos in Barcelona who were mostly born and raised in Spain.  Attendees also enjoyed the live contemporary performances from Filipino young singers, dancers and bands in Barcelona.

Coral Asia, a choir composed of singers from various parts of Asia and formed under the leadership of Casa Asia and the Barcelona Immigration and Intercultural Department, performed folk songs from India, Iran, Japan, Korea, Macau, Catalonia, and the Philippines.

The UP-Manila Chorale serenaded the audience with their rendition of the Visayan folk song, Rosas Pandan, the Lion King’s Circle of Life, and their interpretation of the Spanish song, Eres Tu (It Is You).  The UP-Manila Chorale’s participation in the celebration culminates the choir’s series of performances in Barcelona.  They have previously performed in Plaza Real, Barcelona’s main square, and at Iglesia de San Agustin, the Filipino parish in Barcelona. 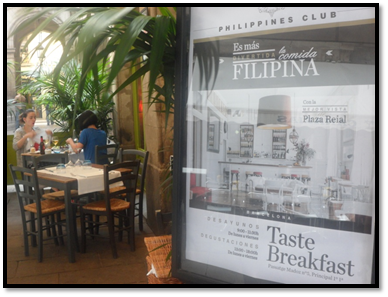 The Barrio Fiesta is one of the activities in the month-long festivities that the Philippine Embassy in Madrid and the Honorary Consulate in Barcelona have organized to celebrate the 115th Philippine Independence and 11th Philippines-Spain Friendship Day.

As part of the celebration, the Embassy and the Honorary Consulate also collaborated with Grup Andilana, owner of a chain of restaurants and hotels all over Spain, to hold a Filipino food festival in the key Spanish cities of Madrid and Barcelona for the whole month of June.

In Barcelona, the participating Andilana café and restaurant are the Philippines Club and Les Quinze Nits.   The menu features a wide variety of appetizers such as lumpiang sariwa, lechon kawali, soup of tinolang manok, ensaladang mangga, pinya at talong, and pancit canton.  While diners can choose between adobong manok and kalderetang baka for their main course.  For dessert, the restaurants offers the Filipino-style leche flan.