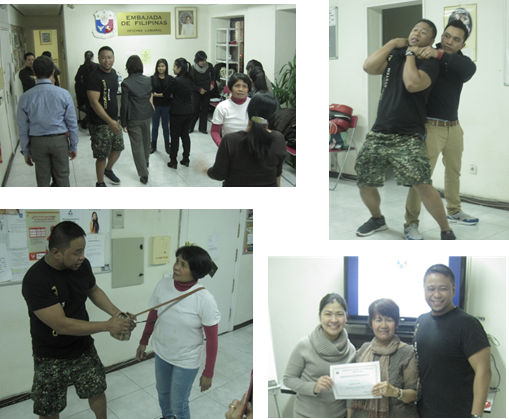 5 December 2014 — The Philippine Embassy in Madrid organized a Basic Self-Defense Workshop for migrant Filipino workers yesterday at the Philippine Overseas Labor Office, as part of its Gender and Development Program of Activities for 2014.

Maestro Guro Lawrence Oleriana Floresca, President of the Spanish Association for Filipino Martial Arts, conducted the workshop.  Mr. Oleriana, a Filipino-Spanish, is said to be the highest representative of Modern Kali Arnis-Tapado in Spain.

During the workshop, Maestro Guro Oleriana taught the participants basic blocking and self-defense techniques.  He demonstrated how everyday objects can be used as weapons in defending oneself.   Real-life situations were used to illustrate how the human body´s vulnerable points can be exploited to neutralize an aggressor.

The same workshop was conducted for Embassy personnel and dependents earlier in the year.  A similar workshop aimed towards protecting Filipino youth from bullying will held next Thursday, 11 December 2014.

This workshop was in line with the Philippines´ annual 18-day campaign to end violence against women, which runs from 25 November to 12 December