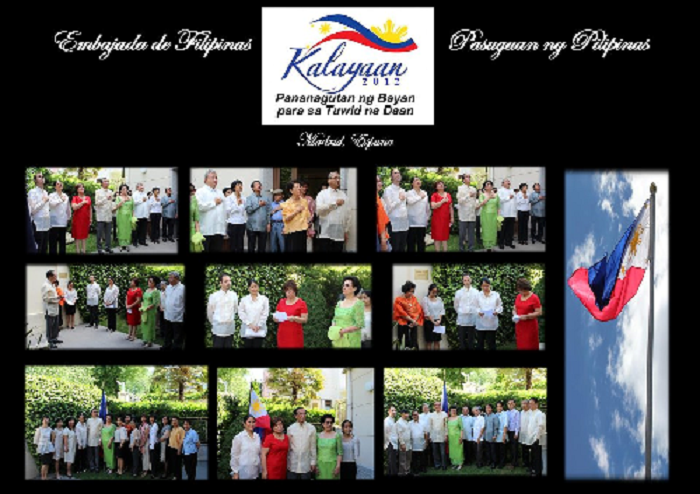 12 June 2012 – The Philippine Embassy in Madrid reported that it held a flag raising ceremony to commemorate the 114th Anniversary of the Proclamation of Philippine Independence today at the Embassy Chancery.

The ceremony, led by Ambassador Carlos C. Salinas and attended by Embassy personnel and their families and members of the Filipino community in Madrid, was followed by the reading of the independence day messages of President Benigno S. Aquino, III, Vice-President Jejomar Binay, and Foreign Affairs Secretary Alberto G. Del Rosario.

In his brief message to those present during the ceremony, Ambassador Salinas reminded everyone of their duties to their country and acknowledged and extolled the sacrifices made by overseas Filipinos for the good of their families in the Philippines and their contribution to the robust growth of the Philippine economy.

The Philippine Embassy in Madrid is currently celebrating its annual Mes Filipino this June in celebration of the Anniversary of the Proclamation of Philippine Independence, 10th Philippine-Spain Friendship Day, and the Anniversary of the Birth of Jose Rizal with a number of activities throughout Spain such as the ongoing concert tour of the UST Singers, a photo exhibit in Lerida, a Philippine Food Festival in Madrid and Cadiz, a diplomatic reception, among others.

For more information on the scheduled activities in Spain, interested parties may visit the Embassy website at www.philembassymadrid.com