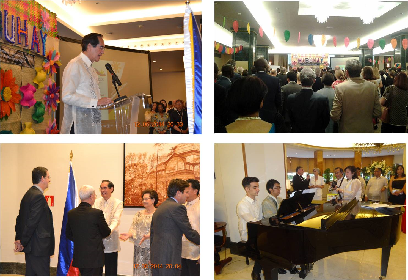 13 June 2014 – In commemoration of the 116th Anniversary of the Proclamation of Philippine Independence and the 12thAnniversary of the Spanish-Philippine Friendship Day, Ambassador Carlos C. Salinas hosted the traditional diplomatic reception on the evening of 12 June 2014 at Hotel InterContinental.

In his welcome remarks, Ambassador Salinas elaborated on the theme of this year’s Independence Day celebration, “Pagsunod sa Yapak ng mga Dakiang Pilipino, Tungo sa Malawakan at Permanenteng Pagbabago.” He emphasized that in order to achieve lasting change and sustainable progress, Filipinos are called upon to be modern-day heroes in the footsteps of Jose Rizal, Andres Bonifacio, Apolinario Mabini, and Emilio Aguinaldo.

Reporting on post-Yolanda rehabilitation efforts and citing the overwhelming sympathy and support received by the Philippines, Ambassador Salinas highlighted the heroism of the international community. He extended his gratitude to Spain for their invaluable help and assistance, a testament to the deep linkage and unwavering friendship between Spain and the Philippines. 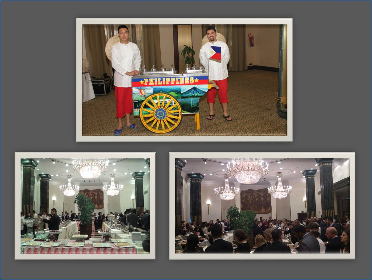 An estimated 440 guests consisting of representatives of the Spanish Government, members of the diplomatic corps and business community, friends of the Embassy, and heads of the various Filipino organizations in Madrid, enjoyed the Pahiyas Festival-themed celebration and a sumptuous spread of Filipino food and delicacies. A highlight of the evening was the typically-Filipino, colorfully painted ice cream cart. Two sorbeteros, playfully attracting guests with the traditional ice cream cart bell, proudly served them Philippine mango, ube, keso and macapuno ice cream. 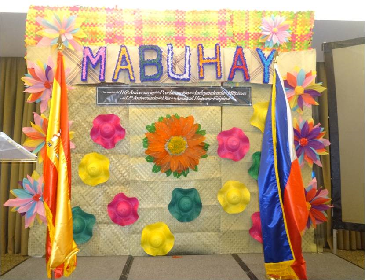 Upon the guests’ arrival, they were welcomed with classic Filipino songs played by a Filipino professional pianist based in Madrid, Laurance Aliganga, and Spanish professional pianist Pablo Cediel Gomez, who played the song “Sa Ugoy ng Duyan.”  The guests were gifted with sinamay fruit/bread baskets as a remembrance of this most festive celebration.