Senator and Mrs. Edgardo J. Angara were the evening´s guests of honor.  Also gracing the event were over 370 guests composed of members of the diplomatic community headed by the Dean of the Diplomatic Corps; officials from the Ministerio de Asuntos Exteriores y de Cooperación (MAEC); Spanish business leaders and NGOs involved in Philippine initiatives; descendants of los ultimos de Baler, Filipinistas, leaders of the Filipino community, and close friends of the Embassy.

The program included remarks from Ambassador Salinas and Senator Angara, the proponent of Republic Act 9187, declaring June 30 of each year as Philippine-Spain Friendship Day.  A video narrating the story of the Siege of Baler was also shown.  To cap the program, a group of Filipino-Spanish children danced La Jota Moncadena, a Philippine dance with strong Spanish influence, to the delight of the crowd.

In his message, Ambassador Salinas, spoke of the value of freedom and the need for this to be protected with vigilance and daily sacrifice. He honored the men and women who made Philippine independence possible. He also affirmed the strong ties of friendship between the Philippines and Spain and expressed shared aspirations for both countries.

For his part, Senator Angara stressed the importance and significance of the decree issued by President Emilio Aguinaldo in giving safe passage to the survivors of the Siege of Baler and he noted the current state of friendly relations that exist between the Philippines and Spain.  He also encouraged Spanish businesses and individuals to invest in and visit the Philippines.

The ballroom was decorated with traditional gold sinamay and capiz lanterns.  A special feature of the evening was an exhibit of 12 winning entries of the 42nd and 43rd Shell National Students Art Competition on loan to the Embassy by Pilipinas Shell in conjunction with Outlook Pointe Foundation. The paintings added a historical and cultural dimension to the evening, highlighting love for country and Spanish influence on Philippine heritage.

The Embassy prepared a sumptuous Filipino buffet consisting of traditional native delicacies – pancit, lumpia, assorted kakanins, and a halo-halo station – to complement the hot and cold hors d´oeuvres served by the Hotel.  Tanduay Rhum was made available at the bar. 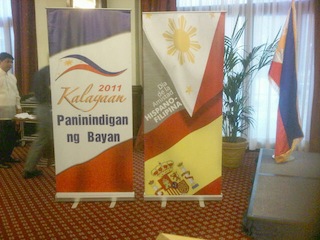 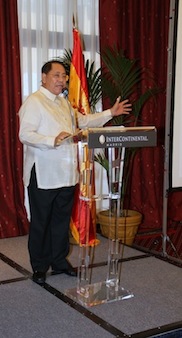 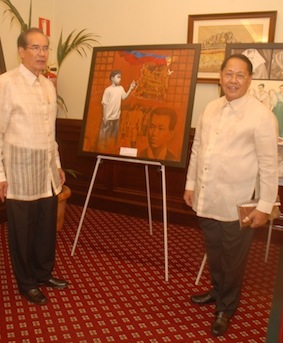 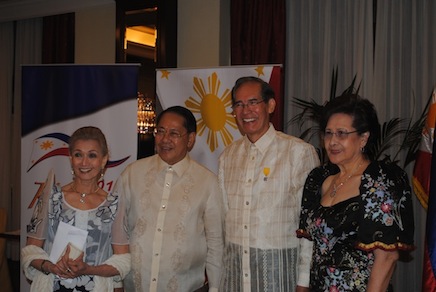