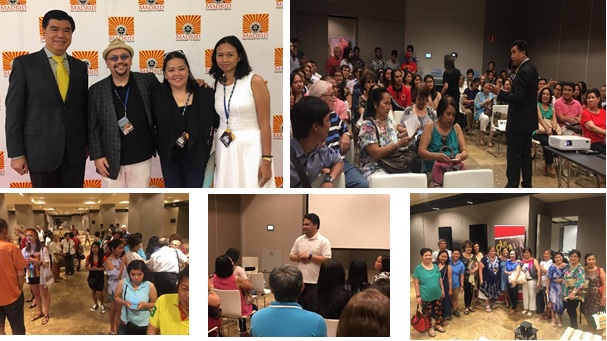 Three Filipino films stood out in the recently concluded Madrid International Film Festival (MIFF) which was held from 08 to 15 July 2017 in Madrid, with 325 short-, feature- and full-length films participating from different countries of the world.

In celebration of the 70th Anniversary of the Establishment of Diplomatic Relations between the Philippines and Spain, the Philippine Embassy in Madrid mobilized Filipinos and Spaniards alike to witness the screening of the three participating Filipino films, in order to highlight the talents of Filipinos and to present the evolving culture of the Philippines through its films.

In his welcome remarks, Consul General Emmanuel R. Fernandez invited the viewers not only to enjoy the films but also to reflect on the message of each of the Filipino films presented in this year’s competition.  He further said that “films are a reflection of our lives” and it is important that we see the significance of the films in our daily and personal lives.

“Magtanggol” by Mr. Sigfreid Barros Sanchez was shown on 12 July 2017 and was deeply appreciated by the audience, particularly by the overseas Filipino workers. It is about “a political family that struggles to hold on to its integrity and reputation as it faces a difficult crisis”. The movie received MIFF nominations for Best Director, Best Actor and Best Actress.

Ms. Jona Ballaran took home the trophy for Best in Costume for “Dagsin” during the MIFF awards night.  The MIFF also recognized “Dagsin” (also entitled “Gravity” in English) through four (4) MIFF Nominations for Best Foreign Film, Best Actress, Best Editing & Best Costume.  The film is a classic love story of a powerful man whose love for his wife goes beyond power, fame and fortune.  This period film directed by Mr. Atom Magadia, which was shown on 13 July 2017, left the audience both in awe and in tears.  Dagsin’s director, Mr. Atom Magadia, and producer, Ms. Anne Prado Magadia, gave the audience a brief insight on the film prior to the screening.

“An Open Door: Holocaust Haven in the Philippines” by Filipino-American filmmaker Mr. Noel “Sonny” Izon won the MIFF Best Feature Length Documentary.  Shown on 14 July 2017, the film narrated how Philippine President Quezon and the world Jewish networks created a haven in the Philippines for over 1,300 Holocaust refugees. The film also got the nod of the critics for Best Director of a Feature Length Documentary.

The participation of these three (3) critically acclaimed Filipino films in the MIFF further proved that Filipino talents could very well compete internationally. Needless to say, these films would promote cultural awareness and appreciation, which would in turn foster a deeper understanding not only between Filipinos and Spaniards, but also among nations in general.  Their participation and success in such a prestigious film festival added a new dimension to the celebration of  the 70th anniversary of diplomatic relations between the Philippines and Spain.

The organizers also expressed surprise over the audience turn-out for this year’s Philippine entries which, according to the organizers, was probably one of the largest in the history of the MIFF.  Despite the fact that the films were shown at daytime when Filipinos and Spaniards alike were mostly at work, all three film screenings were full-packed with both Filipino and Spanish crowds which gave a resounding applause at the end of each film.  Great reviews were also heard from the audience.

The Madrid International Film Festival is one of the most popular film festivals in Europe which features different quality films from around the world.  It is held every year in Madrid with hundreds of participants competing for the coveted awards in different categories.