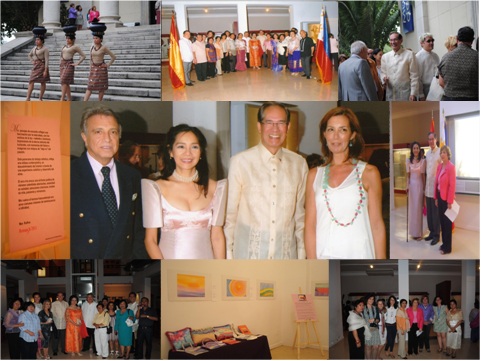 Inauguration of the ROMANZA Exhibit of Ms. Marivic Rufino

The Philippine Embassy in Madrid launched Mes Filipino with the inauguration of a painting exhibit by Ms. Marivic Rufino today at the Museo Nacional de Antropología.

Mes Filipino is the month-long celebration organized by the Embassy in close coordination with the Knights of Rizal and the Filipino community to commemorate the 113th anniversary of Philippine Independence, the 150th birth anniversary of Dr. Jose Rizal, and the 9th Philippines-Spain Friendship Day.

The exhibit, entitled ROMANZA, features various colorful and lush watercolor, acrylic, and mixed media works done by Ms. Rufino over the years.  In addition to artwork, the exhibit also contains selected poems in Filipino by National Artist for Literature, Virgilio S. Almario.  Spanish and English translations of the poems were provided by Ms. Marne Kilates and Mr. Miguel Realmonte, respectively.

Ambassador Carlos C. Salinas emphasized the importance of celebrating the 150th anniversary of Dr. Jose Rizal´s birth and his continuing influence in shaping Philippine history in his remarks during the cocktail reception which was attended by over one hundred fifty (150) of the Embassy´s contacts and closest friends.  He strongly encouraged guests to participate in the various activities (i.e. lectures, film showings, exhibitions, contests, etc.) prepared by the Embassy for the month of June.