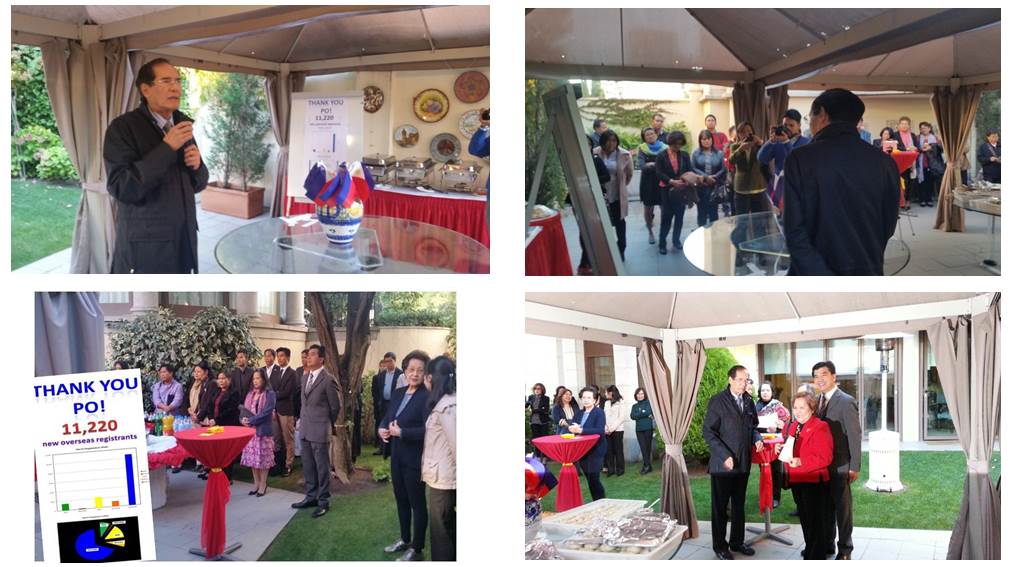 Last October 22, 2015, Ambassador Carlos C. Salinas hosted a  thanksgiving cocktails at his official residence in Madrid  in honor of Filcom and business leaders in Spain and Andorra, to thank them for their support for the Embassy’s overseas voter’s registration campaign.

The event was attended by leaders of Filipino community organizations, business  establishments and individuals who helped the Embassy in its campaign which started in May 2014 and will end on 31 October 2015.

In his thank you message, the Ambassador extended his gratitude for the support extended by the Filipino community and business establishments for the registration campaign in Spain and Andorra.  The Philippine Embassy in Madrid reached the ten thousand new registrants target set by the Department on 28 August 2015, two months before the overseas registration deadline on 31 October 2015.

The Ambassador congratulated the Filipino community, members of the business community , the Embassy’s OVR team and other individuals for having exceeded the target and for achieving an unprecendented success in the overseas registration history of Madrid PE.  He lauded the bayanihan spirit of the Filipinos, which the Ambassador said was the key to the success of the project.  The Embassy also distributed certificates of appreciation to groups, companies and individuals who supported the project.

Ambassador Salinas presented the comparative historical statistics of overseas registration in Spain and Andorra from 2003 to 2015, which showed the dramatic increase in the number of new registrants in 2014-2015. With one more week remaining before the set deadline for overseas registration, the Embassy has already registered one hundred ten percent (110%) more than the number of registrants from 2003 to 2012 combined.

The Philippine Embassy has further intensified its registration campaign with mobile registrations set in areas frequented by Filipinos and flyer distribution around  business establishments in Madrid.