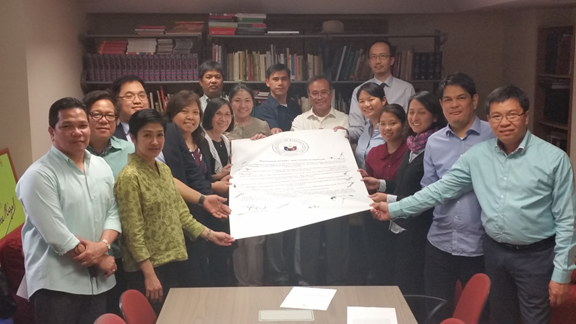 The Philippine Embassy in Madrid conducted an Echo Training on Anti-Trafficking in Persons (TIP) to further strengthen the Embassy’s efforts in combating human trafficking.  The training follows through on the Regional Workshop on Anti-Trafficking in Persons for Foreign Service Posts in Europe conducted by the Department of Foreign Affairs from 16 to 20 March 2015 in Vienna, Austria.

It included case studies and simulation exercises to enhance the skills of participants in identifying and addressing potential TIP cases.   The training also provided participants with situationers on TIP in Spain and Europe.

To signify their commitment, the participants pledged against TIP and crafted a Plan of Action which identified the gaps and challenges in the fight against TIP, best practices in addressing TIP cases and key performance indicators to further improve the delivery of services against human trafficking.

Embassy intends to conduct similar trainings to Filipino communities in Spain and Andorra. The training forms part of the Embassy´s Gender and Development activities for 2015.