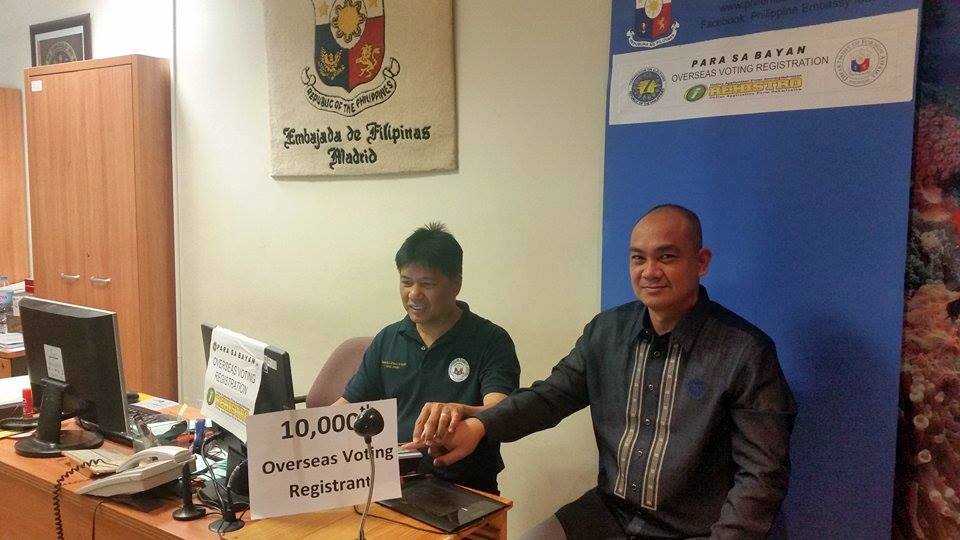 The Philippine Embassy in Madrid met its target of 10,000 new overseas voters on August 28,2015  more than two months ahead of the deadline set for October 31, 2015.  Its 10,000th registrant was its Military and Defense Attache, Colonel Romulo Manuel. Despite that, it has scheduled several OV registration outreach missions over the weekend in hopes of exceeding its target even more by the end of August.

Since May last year, Madrid PE has embarked on a sustained, intensive campaign for overseas registration.  No less than its Head of Post, Ambassador Carlos C. Salinas, is spearheading the all-out campaign, with the assistance of Consul General Emmanuel R. Fernandez and Madrid PE’s OVR Team.  Besides undertaking the usual activities for the promotion of OV Registration, Madrid PE has come up with several novel and creative ways to step up its campaign.

One of them was to launch a popularity contest among the members of the Filipino community which it called “Lakan at Mutya ng Pilipinas sa Madrid, 2015.”  Filipino organizations were asked to field their candidates for “Mutya” (an old Filipino word for “pearl” or “jewel”)  and “Lakan”  (an old Filipino word for “a nobleman”).  However, the winning pair would be chosen not on the basis of the amount of money the organizations could raise (as is usually the case in so-called “popularity contests”), but on the number of people that each organization could convince to register as Overseas Voters.  The winning “Mutya” and “Lakan”  were crowned during the Barrio Fiesta 2015, the annual Independence Day Celebration of the Filipino community in June.  The project literally fired up the Filipino community and brought in thousands of new OV Registrants for Madrid PE.

The other novel strategies that Madrid PE used in its campaign included, among others, forging memoranda of agreement with business establishments (which are either owned by or that cater to Filipinos) for the latter to help the Embassy with its campaign either by posting/distributing information materials within their premises or allowing the Embassy’s OV Team to conduct outreach missions therein.  On top of that, Ambassador Salinas literally takes every single opportunity to personally campaign for the OV Registration in churches and other religious venues, in restaurants which hire Filipino personnel, and during the various activities of the Filipino community.

With still two months to go before the October 31 deadline, Ambassador Salinas says he expects Madrid PE to exceed the target by 4 digits more.