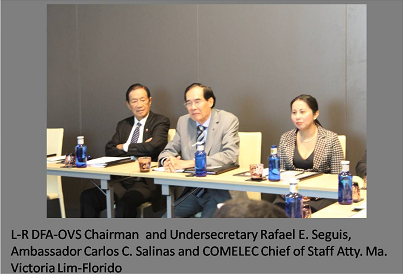 The Philippine Embassy in Madrid (Madrid PE) recently hosted the On-Site Regional Training on the Implementation of the I-Rehistro Program for Europe-based foreign service posts (FSPs).  A total of 21 representatives from the different Philippine foreign service posts in Europe (plus Tel Aviv PE) attended the seminar, which was held at the InnSide Hotel in Madrid, Spain, from 28 to 29 April 2015.

In his welcome remarks to the participants, Ambassador Carlos C. Salinas stressed the importance of the electoral process in a democracy.   He pointed out that if, as Abraham Lincoln said, democracy is “a government of the people, by the people, and for the people,” then there is no better way for the people to exercise and assert their critical role in a democracy than through the process of elections.  It is through the electoral process that the common people can literally choose who will represent them and who will act on their behalf as far as the running of their government is concerned.

He then commended COMELEC and the DFA’s Overseas Voting Secretariat (DFA-OVS) for their tireless efforts to explore novel ways of facilitating the people’s participation in the electoral process, such as the I-REHISTRO Program, which offers an alternative and more convenient way for people to register as Overseas Voters. 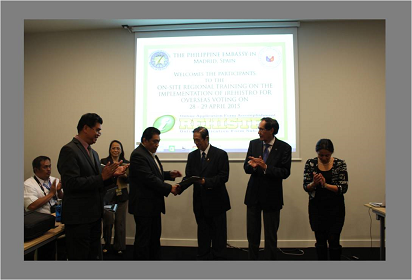 For his part, Undersecretary Rafael E. Seguis (who concurrently serves as the DFA-OVS’s Chairman) urged all FSPs to “think outside the box” and come up with new ways of encouraging our countrymen to register for and participate in the next elections, such as by promoting the use of the I-REHISTRO.  He also reiterated his challenge for all Posts not only to attain but, if possible, to exceed the targets they have committed to meet during the Regional OV seminar in Rome, Italy last year.

In the same vein, Atty. Ma. Victoria Lim-Florido, Chief of Staff of COMELEC Commissioner Arthur D. Lim, urged the participants to make our countrymen realize that suffrage is a right that people had to fight hard for in the past, and that up to now not everyone is given the chance to exercise such a right.  We should therefore help our countrymen appreciate (and, more importantly, avail of) the mechanisms we are providing them in order to ensure that they could freely exercise their right to vote.

On the last day of the seminar, Ambassador Salinas and Madrid PE’s Consul General Emmanuel R. Fernandez shared with the participants the “best practices” which the Embassy has come up with in order to promote the I-REHISTRO program and enhance its campaign for OV Registration.  Undersecretary Seguis urged other Posts to learn from Madrid PE’s best practices and pursue parallel and/or alternative tracks for promoting the I-REHISTRO and increasing the number of new OV registrants.