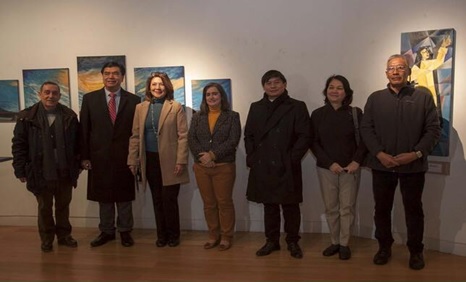 Consul General Emmanuel R. Fernandez (currently the Charge d’Affaires of the Philippine Embassy in Madrid) and Mrs. Nesa Nolido (the Head of the Philippine Overseas Labor Office in Madrid) graced the art exhibit of Fr. Carlos Simbajon, O.P., a young, multi-talented Filipino Dominican priest, last November 30 in Avila, Spain.  Entitled “La Presencia de los PP. Dominicos en Ávila” (The Presence of the Dominican Fathers in Ávila), the said art exhibit was inaugurated last November 16 at the Auditorio de San Francisco, in Avila.  It is part of the activities being held this year in commemoration of the 800th anniversary of the founding of the Dominican Order (or the Order of Preachers). 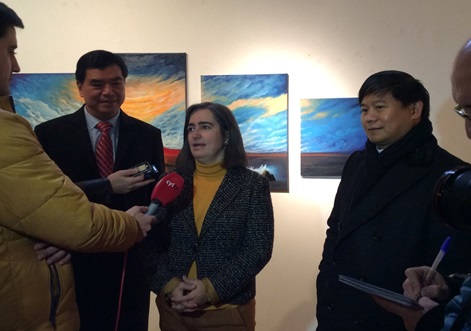 Speaking of Fr. Simbajon´s paintings, Ms. Sanchez-Reyes said that his artistic works not only encapsulate the life and presence of the Dominican Friars in Avila but also the positive influence they have exerted on the life of Abulenses (the natives of Avila).  The exhibit depicts the long history of the Dominicans in Avila (spanning more than five centuries), particularly the role of the Royal Monastery of Santo Tomás as the seedbed where Dominican missionaries are trained for their future work.

For his part, the Consul General expressed how proud the Philippine Embassy was to see a young Filipino priest-artist exhibiting his works in the City of Avila – a city known worldwide for its artistic treasures.  He urged Fr. Simbajon to continue serving God through his art, while bringing honor to the Philippines through his artistic, musical and priestly undertakings.  He also congratulated the Dominican Order on the occasion of the 800th anniversary of their foundation, and thanked them for their many contributions to the religious, social, and cultural life of Filipinos. 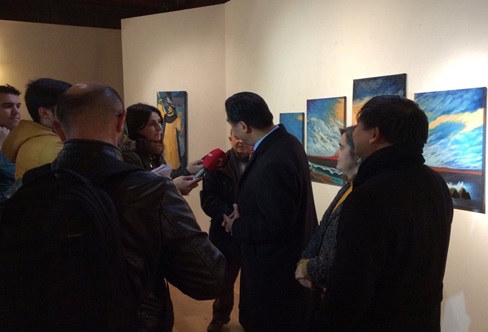 On the relationship between art and the Gospel, Fr. Simbajon expressed his belief that “through painting, the Gospel message can be effectively shared to humanity because visual art is a silent preacher but an excellent way of penetrating the heart of men to share Christ´s mercy and love.”

The more than 50 works of Fr. Simbajon´s art that form part of the exhibit include portraits of the founder of the Order, the eminent figure of Sto. Domingo de Guzmán;  Saint Peter, The Martyr; 21 frames in glass of the Blessed Spanish Dominican Martyrs beatified by Pope John Paul II in 2008; Sta. Teresa de Ávila; Sta. Magdalena; and many others.  Those that particularly stand out are his portrayal of  the “extasis” of Sto. Domingo, which depicts the saint’s close intimacy with the crucified Christ, as He entrusts to St. Dominic the Bible and sends him to preach to the world; and his “La Cena Comunitaria” (Religious Community Supper).

In his closing remarks, Fr. Carlos Linera, OP, the Prior of the Real Monastery of Sto. Tomás, pointed out how symbolic it was that, more than 400 years ago, the Dominicans travelled to the Far East to preach the Gospel there – and how, now, a Filipino Dominican friar has come back to Avila to share that same faith through his works of art.