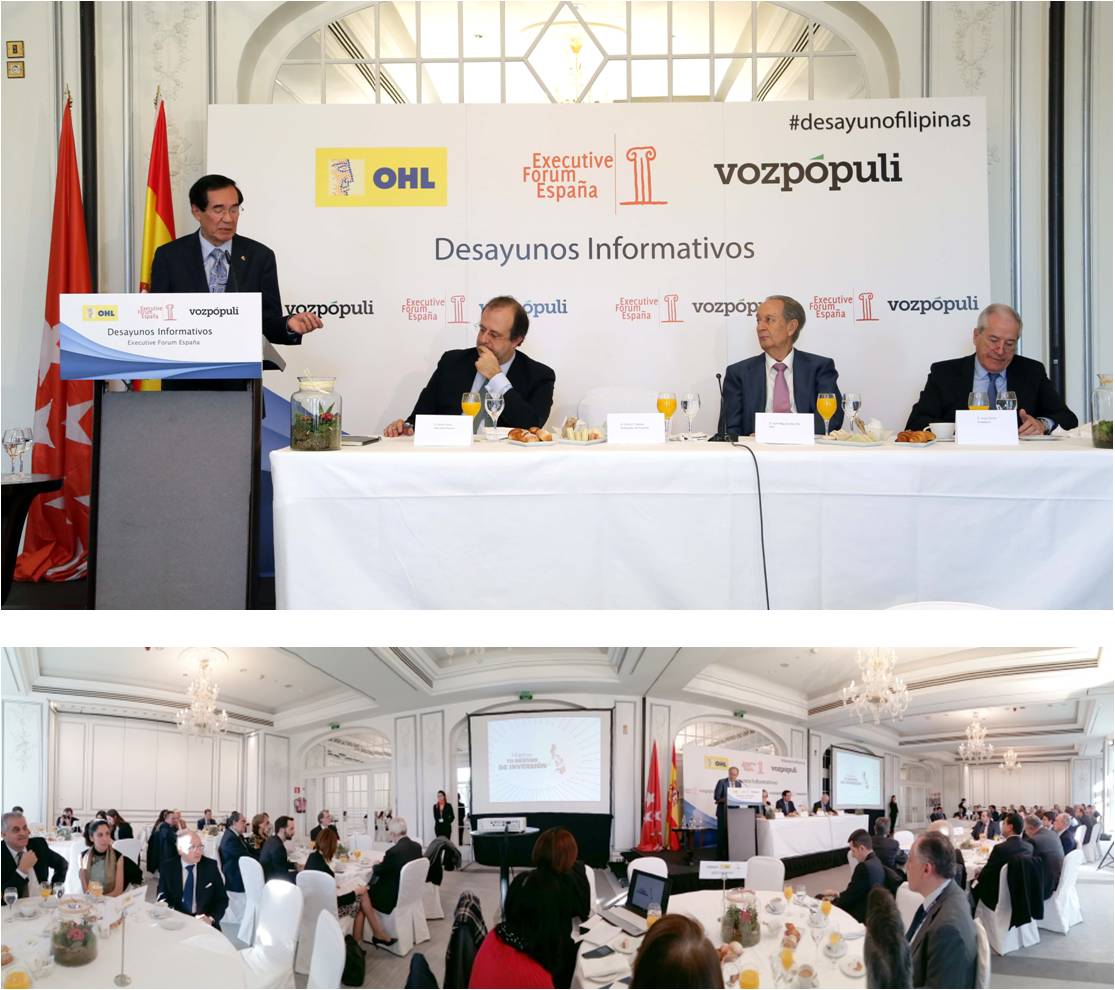 Ambassador Carlos C. Salinas successfully led, for the second time, an Executive Breakfast Forum on the Philippines which highlighted the readiness of the Philippines to become an investment destination for foreign markets, in particular for Spanish markets. The first breakfast forum conducted by the Embassy was on 23 October 2013. The forum was, without doubt, another opportunity for the Embassy to attend to the ever-growing interest of foreign investors in the Philippine market. Since 2012, the Embassy has been actively promoting Philippine investment opportunities to the Spanish market through seminars and conferences held in various regions of Spain.

The President of OHL, Mr. Juan Miguel Villar Mir, who introduced the Ambassador as the forum´s speaker, lauded the Ambassador´s efforts and accomplishments in further strengthening the relations between the Philippines and Spain, in particular their trade relations. There is now an active exchange of investments between the companies of both countries. As proof of this, he mentioned the various investments of OHL in the Philippines and the biggest investment made by Filipino businessman, Mr. Andrew Tan, who purchased the Torre Espacio last November 2015.  Now more than ever, the Philippines is considered by many Spanish companies as their gateway to the ASEAN market of 600M population.

Ambassador Salinas underscored that the strong bilateral relations currently existing between Spain the Philippines boost economic and tourism growth. The presence of Spanish businesses in the Philippines and the number of Spanish tourist arrivals in the country are constantly growing. He also cited “the strategic location of the country in the Pacific, making it a highly accessible logistics hub and transshipment center. More than that, however, is the support system we have in place—the physical and systemic infrastructure manifested through our sprawling cyber parks and information and communication technology or ICT centers; our freeport zones and industrial estates; and our excellent tourism base. More than a sound investment and business location, what we can offer the world is a pleasant, home-away-from-home experience; an inviting lifestyle; a welcoming family. Today, the Philippines has emerged as the global leader in providing complete business solutions support to any type of enterprise. We have an excellent pool of highly qualified, highly literate and technically savvy personnel, world-class ICT infrastructure with global connectivity capacity, and more importantly, government support for the Philippines to serve as your businesses’ shared services center covering the entire gamut—from finance, accounting, human resources, ICT solutions, and engineering design capability.”

The presentation was very well received by the audience and was followed by a Q&A.

The forum, which Post co-organized with the Executive Forum España, Obrascón Huarte Lain (OHL) and Voz Populi, was held on 4 March 2016 at Hotel Westin Palace. The audience, with an estimated number of 110, was composed of representatives from the private and government sectors, the diplomatic corps, and Spanish universities.

The Executive Forum España is a company that organizes informative breakfast meetings both for the government and private sectors in Spain. The company was established in Madrid in 2004 and since then has become a venue for foreign embassies in Spain in promoting their countries.