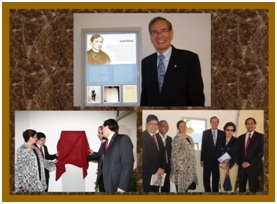 In a solemn ceremony organized by the Barcelona City Government together with the Philippine Consulate General in Barcelona, “Sala Jose Rizal” was named in honor of Philippine national hero, Dr. Jose Rizal, at the Montjuic Castle, in commemoration of his 150th birth anniversary. Dr. Rizal was temporarily detained in Montjuic Castle in October 1896, as he was en route to Cuba for a medical mission and eventually deported to Manila to face execution in December of that year.

Prior to his unveiling of the Dr. Rizal marker at the “Sala Jose Rizal”, Ambassador Salinas stated that this event was truly a singular honor for the Filipino nation. Montjuic Castle which once represented Dr. Rizal’s loss of freedom, would be from now on, a place honoring his memory and libertarian ideals. He thanked the Barcelona City Government for this distinguished recognition, as well as the Filipino community in Barcelona for supporting the Philippine Consulate General in Barcelona in the realization of this meaningful project.