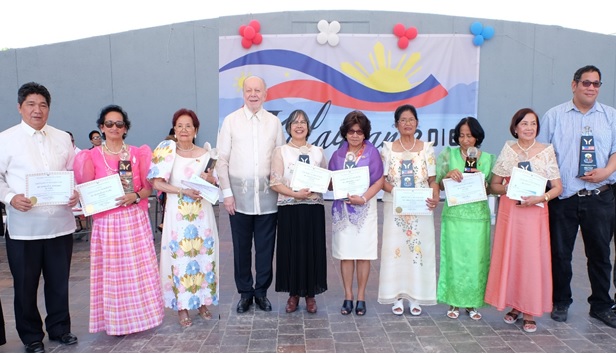 The Philippine Embassy in Madrid honored ten longest-staying Filipino workers in Spain and Andorra through the 1st Gawad Ambassador Philippe J. Lhuillier Para sa Pinakamatagal na Manggagawang Pilipino sa Espanya at Andorra, which was awarded on 17 June 2018 during the Filipino community´s celebration of the 120th Anniversary of Philippine Independence in Madrid.

The recognition was the first in the history of the Embassy and was well received by the Filipino community when it was launched in February 2018.  Filipinos from all over Spain, were excited and sent their nominations.

In his remarks, Ambassador Philippe J. Lhuillier hailed the Filipino workers all over the world, particularly in Spain and Andorra for their hard work and dedication.  He expressed his utmost admiration and respect to these men and women who braved homesickness and various difficulties to provide for their families and loved ones.  He said the true treasure of the Philippines are its people.

The award, a brainchild of the Ambassador, was aimed at honoring the pillars of the community, and recognizing them for their sacrifices, dedication to work, commitment to their families and contribution in nation building.

“Paying homage to those who were there before us, who served as inspiration and strength not only to their loved ones but to the community has been long overdue.  It is with great pride that I recognize them today in this occasion”, the Ambassador uttered as the crowd cheered. 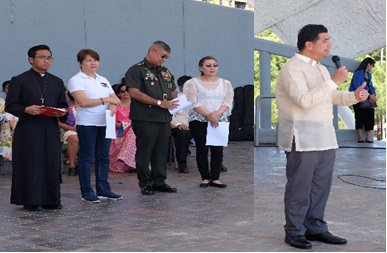 PHOTO: Deputy Chief of Mission Emmanuel R. Fernandez with the members of the Selection Committee

The selection committee, which was composed of Embassy officials and distinguished members of the community, screened more than thirty nominees who submitted proofs of entry/arrival in Spain or Andorra and Filipino citizenship.  They also narrated their experiences, which fascinated the audience.

Deputy Chief of Mission Emmanuel R. Fernandez, who was the Chairman of the Selection Committee lauded the awardees, not only for their long stay in Spain but also for being Filipinos despite the long years of stay in Spain.  Consul General Fernandez said that the awardees proved that no matter where the they are, the Filipino heart and spirit will never be forgotten.

This year´s first awardees received from the Ambassador especially designed trophies courtesy of Ambassador Lhuillier.  The trophies were custom-made in Manila for the award.

Mr. Eduardo Fernandez Alvarado from San Manuel, Pangasinan, 45 years in Spain.  He arrived in Spain on 23 September 1972 to work in London but was able to find work in Barcelona. He is now retired and currently living in Barcelona, Spain.

Ms. Adelaida Abrero Suyat  from Sta Cruz, Ilocos Sur, 42  years in Spain.  She arrived in Sevilla on 26 Nov 1975 as contract worker. She is retired and currently living in Sevilla, Spain.

Ms. Francia Berdalosa De Villa from Iriga City, 40 years and 9 months in Spain. She arrived in Santander to work as a domestic helper on 09 September 1977.

Ms. Editha Cariño Etrata from Binalonan, Pangasinan, 40 years and 4 months in Spain.  She arrived in Malaga, Spain on 22 February 1978 as a domestic helper.

Ms. Concepcion Piñon Zaragoza from Palompon, Leyte, 40 years and 4 months in Spain.  Together with Ms. Etrata, she arrived in Malaga on 22 Feb 1978 as a domestic helper .

Ms. Leonida Honrada Hipolito from Dasmariñas, Cavite, 40 years and 1 month in Spain. She arrived in Madrid on 04 May 1978 and worked as a household help.

Ms. Marjoling Madrid De Leña from Tayug, Pangasinan, 40 years and 6 days. She arrived in Madrid on 23 June 1978 to work as a nanny.

Mr. Armando Tiro Gabriel from Tondo, Manila, 39 years and 11 months in Spain.  He arrived in Madrid on 07 July 1978 to work as a household help.  He is now retired and is living in Madrid.

Ms. Ma. Luzviminda Roque Ramos from Muñoz, Nueva Ecija, 38 years and 10 months in Spain. She arrived in Madrid on 10 August 1979 and worked in a restaurant as a receptionist.

Mr. Reynaldo Rojas Manzano from Manila, 38 years and 8 months in Spain.  He arrived in Barcelona to work as  a “key puncher”.  He is currently working as Computer System Manager in Barcelona. 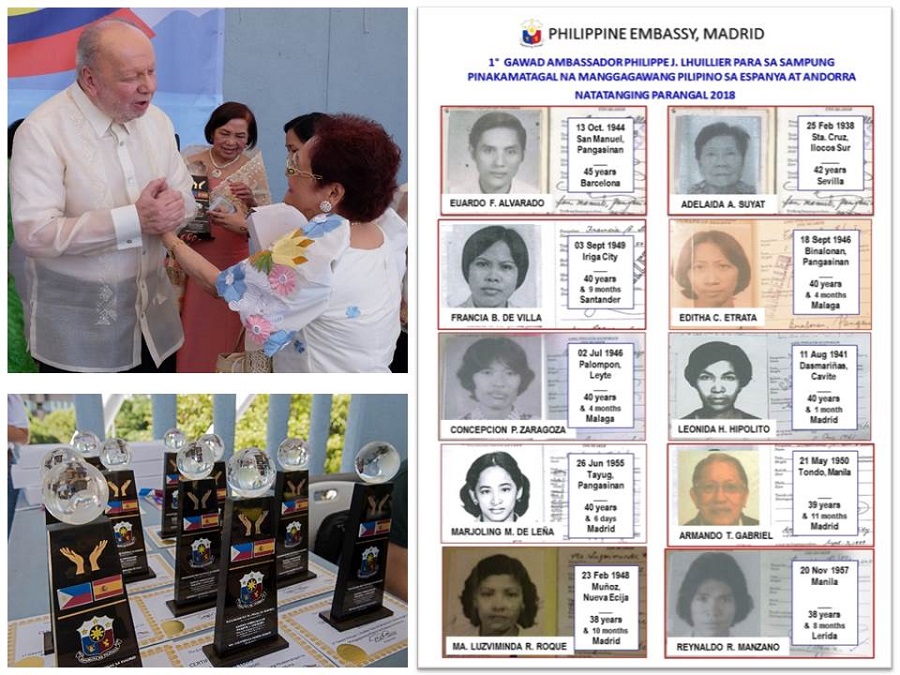 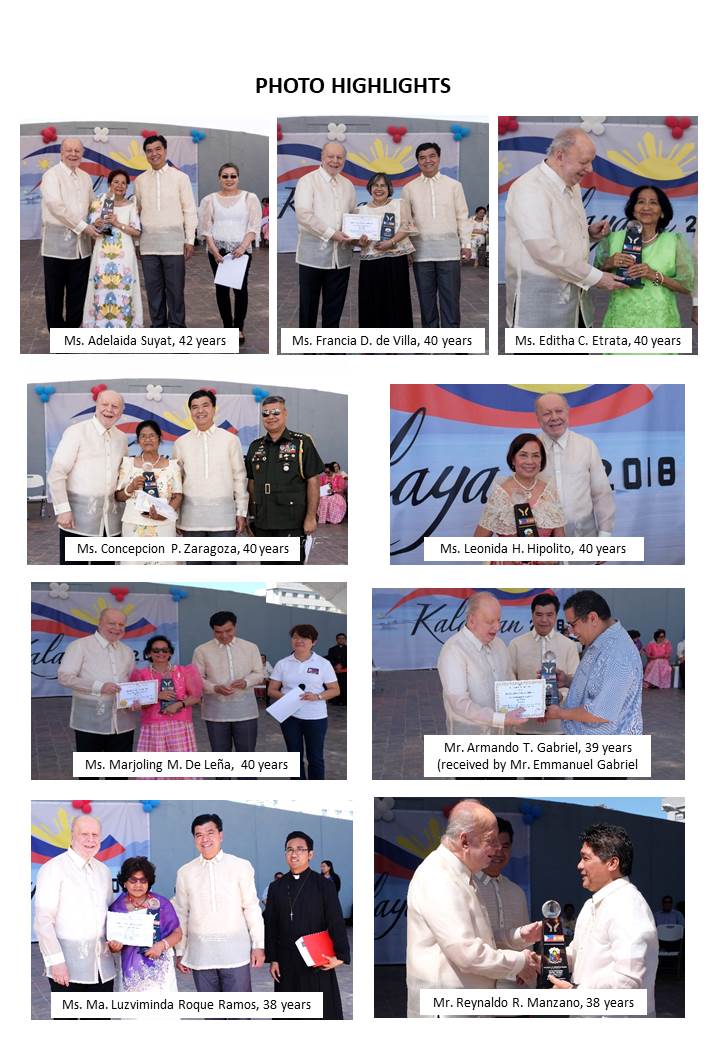 Note: Mr. Eduardo F. Alvarado (not in photo), 45 years and the longest staying Filipino worker in Spain for 2018, was not able to travel to Madrid to receive his award.  The Embassy will send his trophy in Barcelona where he is currently residing.