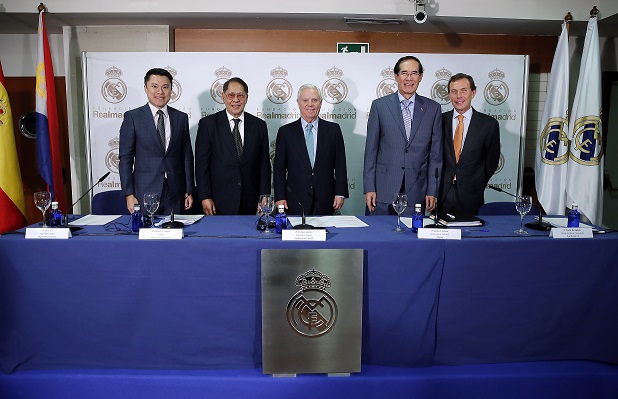 The Foundation of the football club Real Madrid will conduct football clinics in the Philippines under an agreement between the Fundación Real Madrid and the PinoySports Foundation which was signed today in Madrid, Spain. 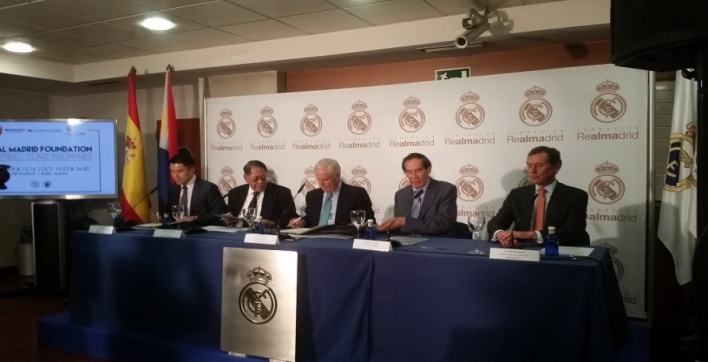 During his intervention, Ambassador Salinas lauded the efforts of the private sector in assisting the Philippine government in strengthening its sports policy. He also underscored the role of sports in developing the values and discipline of young people, which will eventually help them be successful in their lives. With this agreement, young people, who do not have the resources to enroll in such a course, will have access to learn and enjoy football. He also expressed his gratitude to Real Madrid for its growing presence in the Philippines and expressed hope that it will continue to do so until the objective of both parties is accomplished.

Mr. Butragueño confirmed that it is the interest of Real Madrid to continue expanding its presence in the Philippines, a country which Real Madrid considers as a friend. Sen. Angara said that “Clinics by Real Madrid Foundation will introduce the world´s most popular sport to more Filipino youth and widen their football participation in the beautiful sports.” Mr. Tan expressed pleasure to be part of this project which will train future Filipino football players and he also expressed confidence that Real Madrid coaches will help the Philippines build a winning team. Mr. Sanchez, on his part, congratulated everyone for finally putting into action the project after about three years of negotiations.

For its initial run, three visiting Spanish coaches will stay in the Philippines for a month to conduct a series of 5-day clinics.  The first two clinics will be held from 5 to 9 and 12 to 16 October, targeting 18 coaches and 180 students from Metro Manila (National Capital Region).  Mr. Andrew Tan of Alliance Global Inc. will be hosting these clinics at his Mc Kinley Hill Stadium located at Fort Bonifacio, Taguig City.

The third and fourth clinics will be held from 19 to 23 and 26 to 30 October, targeting 6 coaches and 60 students from Baler, Aurora (Region III).

Fundación Real Madrid has been conducting sports clinics and coaches’ training programs in Spain and abroad.  Through these programs, the foundation aims to contribute to the development of the youth, especially those in developing countries.