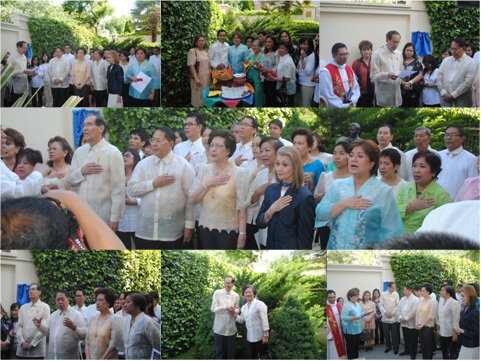 The Philippine Embassy in Madrid, led by Ambassador Carlos C. Salinas, held a flag-raising ceremony with Embassy personnel and their families and members of the Filipino community at the Embassy grounds today to commemorate the 113th anniversary of Philippine Independence.

Senator Edgardo J. Angara and Department of Labor and Employment Secretary Rosalinda D. Baldoz were present at the simple ceremony.

Senator Angara delivered an inspiring response calling for Filipinos to never forget their roots and to do everything possible to protect our heritage and to contribute to the continuing development of our country.

After the ceremony, the guests witnessed the inauguration of Sentro Rizal and the unveiling of Jardin Rizal at the Embassy premises.