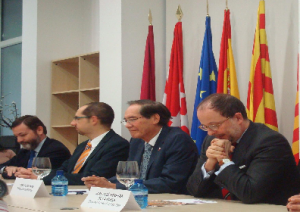 07 March 2012 – The Philippine Embassy in Madrid reported that Casa Asia, in close collaboration with the Asociación Española de Estudios del Pacífico (AEEP), organized a conference on the Philippines and its participation in the Cadiz Constitution of 1812 and subsequent Spanish constitutions to commemorate Día del Pacífico (Pacific Day) yesterday at the Centro Casa Asia – Madrid.

The main speaker for the conference was Mr. Carlos Madrid, a known historian specializing in the Philippine colonial period.  In his lecture, he enumerated Philippine participation in the Spanish Cortes as one of the overseas colonies of Spain.

Of particular note in his lecture was the Philippines´ participation in the drafting and signing of the Cadiz Constitution, whose 200th anniversary will be commemorated in Cadiz this forthcoming 19 March 2012.  Representatives from all former Spanish colonies, including the Philippines, will be present during the celebration.

In his remarks, Ambassador Salinas commended the work of Casa Asia and the AEEP in bringing Asia and the Pacific, particularly the Philippines, closer to Spain through collaborative projects that deal with a whole range of political, economic, social, and cultural issues.  He expressed hope that Casa Asia and AEEP will continue working towards enriching Philippines-Spain relations.

Dia del Pacifico celebrates the arrival of Ferdinand Magellan and Juan Sebastian Elcano in the Marianas Islands on 06 March 1521 which is considered as the first encounter between people living in the Pacific islands and Europeans.