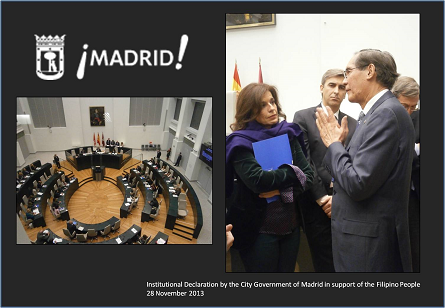 28 November 2013 – The Philippine Embassy in Madrid reported that the City Government of Madrid, during its plenary session on 28 November 2013, approved an institutional declaration expressing its support and solidarity to the Filipino people at the devastation caused by typhoon Yolanda. The session was chaired by its President, Mr. Angel Garrido Garcia.

The institutional declaration was read by Mr. Garrido as follows: “The Ayuntamiento de Madrid wishes to express its utmost solidarity to the Filipino people in the midst of the tragedy and devastation caused by hurricane Yolanda which occurred in the Philippines.  We share the pain of massive loss of lives and destruction of properties of thousand of persons. From this Municipality, we appeal to the Madrileños to respond with generosity in support of our brothers in the Philippines who are suffering from this tragedy.”

Present during the session was the Mayor of Madrid, Ana Botella Serrano, with whom Ambassador Salinas had a brief talk after the session. Mayor Botella expressed her sincerest condolences and concern to the Filipino people. Ambassador Salinas briefed the Mayor about the latest situation in the Philippines, both on the latest figures of the devastation and the Government´s relief operation efforts