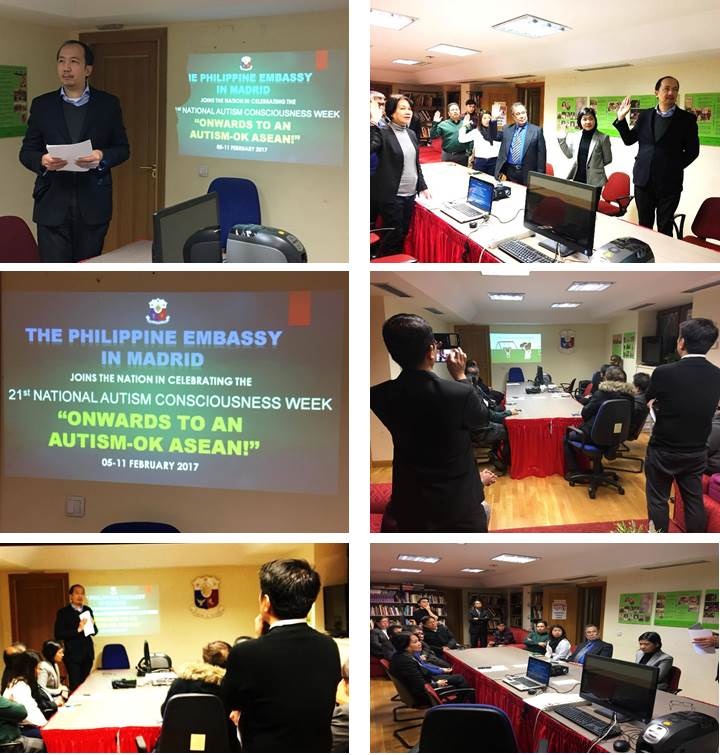 CLOCKWISE: Chargé d’Affaires, a.i. Mr. Gerardo P. Abiog delivers his message. CDA Abiog led the recitation of 1Pangako. A video entitled “What is Autism” was also presented. Madrid PE Banner which was also posted in the website and facebook page.

The Embassy of the Philippines in Madrid joined the nation today, 06 February 2017, in celebrating the 21st National Autism Consciousness Week in a ceremony held at Sentro Rizal of the Embassy.

Chargé d’Affaires, a.i., Mr. Gerardo P. Abiog, emphasized the importance of understanding the condition and encouraged everyone to share such awareness with our family, friends and the community. He also stressed that the integration, support and acceptance as our equal will further harness their skills and talents.

The Embassy also presented a short video on “What is Autism” to further increase awareness on the condition. Capping the celebration, the Embassy personnel joined the nation in expressing their support by simultaneously reciting 1Pangako.

Starting today until February 11, the “What is Autism” video will also be used as video loop at the Embassy’s Consular Section.