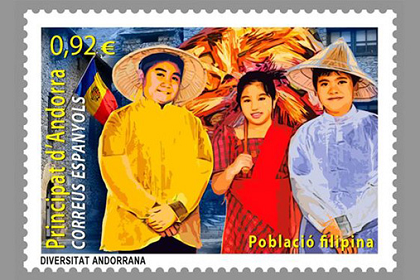 21 July 2014 – The Philippine Embassy in Madrid reported that the Ministry of Culture of the Principality of Andorra has started issuing postage stamps entitled “Població Filipina” on 7 July 2014. This is in recognition of the OFW´s economic contribution to the Principality.

About 90,000 pieces of stamps were printed in €92 cents denomination. Andorra´s postal service is operated by Spain and France whose postal administrations issue their own postage stamps for use in Andorra only.

As of 2013, there are about 800 Filipinos in Andorra, majority of them work as engineers, sales agent, and hotel and restaurant workers. Most of them remain Filipino citizens, as it takes at least 25 years´ residency for a foreigner to be eligible for Andorran citizenship.