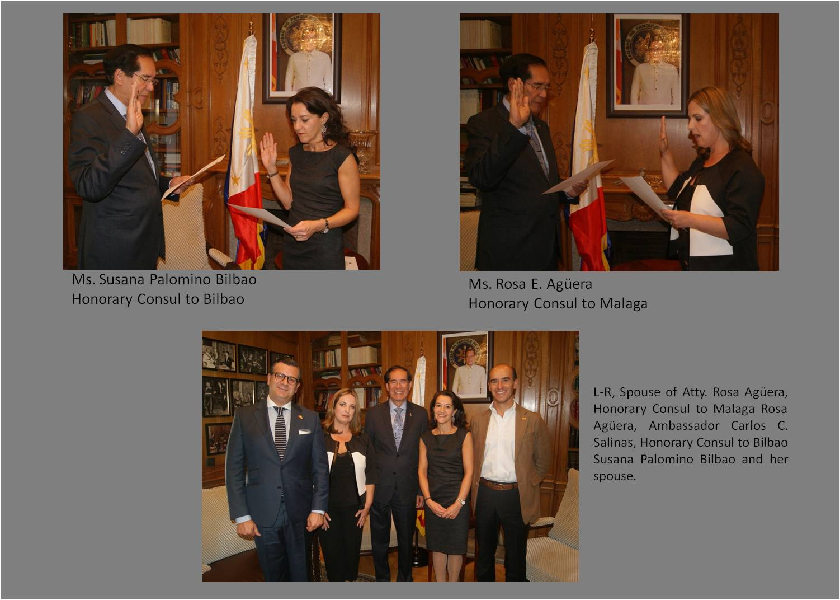 28 October 2014  – Philippine Ambassador to Spain, H.E. Carlos C. Salinas, administered the Oath of Office of the new Philippine Honorary Consuls to Bilbao and Malaga on 24 October 2014 at the Philippine Embassy Chancery in Madrid.

Ms. Susana Palomino Bilbao, an executive of the Metro Bilbao, S.A., is the new Honorary Consul for Bilbao. She will cover the areas of the autonomous communities of the Basque Country, Cantabria and La Rioja, the provinces of Burgos and Palencia, with headquarters in Bilbao. There are an estimated 900 Filipinos living in her areas of jurisdiction.

Ms. Rosa Agüera, a practicing lawyer, is the new Honorary Consul for Malaga.  She will have jurisdiction over the provinces of Malaga, Almeria, Granada and Murcia, with headquarters in Malaga. Approximately 1,500 Filipinos reside in the said areas.

On the same day of the oath taking ceremony, Misses Palomino and Aguera were given a briefing on consular, administrative and financial procedures, as well as updates on cultural, economic and political activities undertaken by the Embassy.  The offices of POLO and OWWA also conducted a briefing for them.

The re-opening of the two honorary consular offices is scheduled before the end of 2014.  The offices in Malaga and Bilbao closed in January 2011 and November 2011, respectively, after the resignation of the respective former Honorary Consuls.

With the re-opening of the two honorary consular offices, the Embassy now has a total of 6 honorary consulate offices all over Spain; namely, Barcelona, Bilbao, Cadiz, Malaga, Palma de Mallorca and Seville.