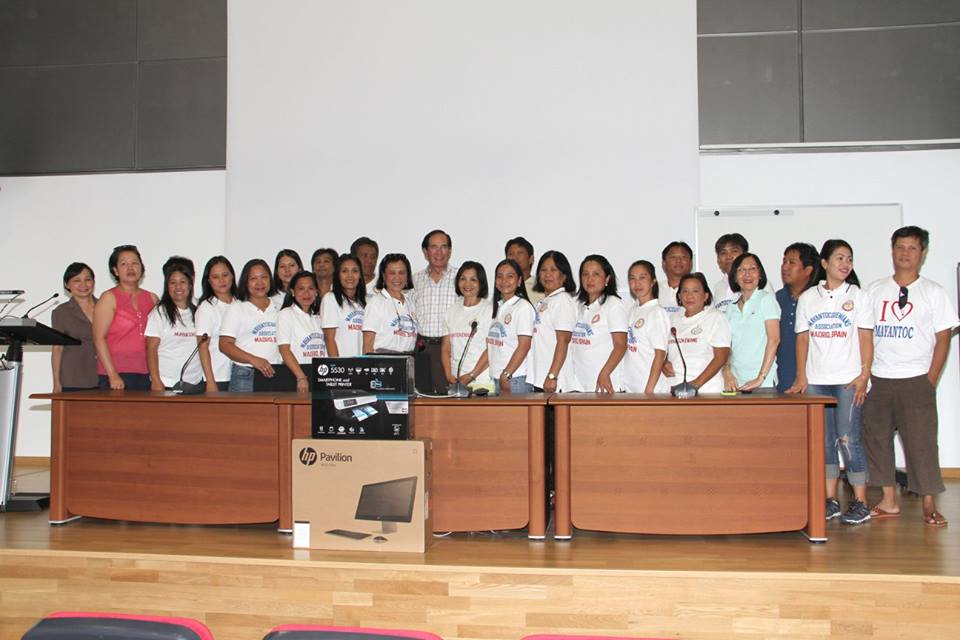 Last August 30, 2015, Philippine Ambassador to Spain Carlos C. Salinas recognized the efforts of Mayantocquenians Association for their assistance in promoting overseas registration among Filipinos in Spain.

The Ambassador lauded the support of Mayantocquenians Association for the Embassy’s “Search for Lakan at Mutya ng Filipinas-España 2015,” whose candidates were hailed as King and Queen during the Barrio Fiesta celebration in June 2015.  The group from Mayantoc, Tarlac won the “modified popularity contest” launched by the Embassy to draw support for and interest in the on-going registration, wherein the organization which was able to bring in the most number of new overseas voting registrants was picked as the winner.

In a simple ceremony held at Las Rozas Municipal Auditorium in Madrid on August 30, 2015, Ambassador Salinas personally thanked the members of Mayantocquenians Association for their support for the project.  He also awarded the group with a brand new desktop computer as the Embassy’s token of appreciation for the group’s efforts.   Madrid PE’s OVR team consisting of Mr. Chester Diaz, Mr. Arnel Bautista, and Ms. Cheryl Bautista, were also present to conduct registration during the event.

Despite the fact that Madrid PE reached the target given it by DFA-OVS Secretariat (i.e. 10,000 new registrants by October 2015) two months ahead of the said deadline, Ambassador Salinas continues his all-out campaign to encourage Filipinos to register and participate in the 2016 National Elections.