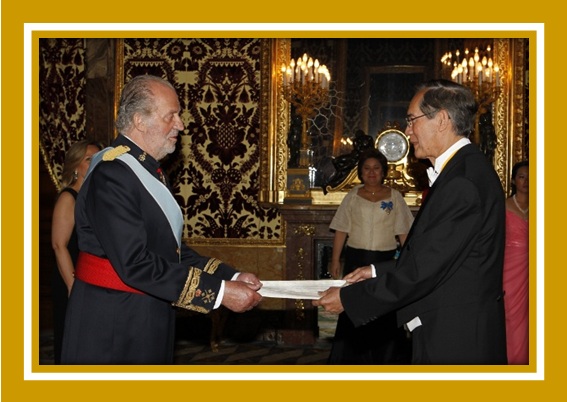 The Philippine Embassy in Madrid reported that Ambassador Carlos C. Salinas presented his Letters of Credence as Philippine envoy to Spain to King Juan Carlos I at the Palacio Real Madrid on May 17.

Ambassador Salinas was escorted from the Embassy Residence by Deputy Chief of Protocol Ramon Ma. Moreno Gonzalez in the official ceremonial car flying the Philippine flag, and preceded by a motorcade of Municipal Police to the Ministry of Foreign Affairs and Cooperation at the Palacio de Santa Cruz.

Upon arrival at the Palacio de Santa Cruz, the Ambassador was greeted with a salute played by the Squadron of Scouts, after which he was received at the Salon de Embajadores.

Military honors were performed before Ambassador Salinas made his way to the Palacio Real Madrid, accompanied by Deputy Chief of Protocol Gonzales in a six-horse ceremonial Berlin Carriage.

Enroute to the Palacio Real the streets of Madrid were lined with enthusiastic members of the Filipino community proudly waving Philippine flags.

Culminating the procession was the arrival of the carriage at the Plaza de la Armeria, where a contingent of the Royal Guard honored the Ambassador and the Filipino people with a moving interpretation of the Philippine national anthem.

The ceremonial introduction and presentation of credentials to King Juan Carlos I was held thereafter, and was followed by the traditional private audience with the King at the Saleta del Nuncio. Also present at the meeting was Spanish Foreign Minister Trinidad Jiménez.

At the meeting, Ambassador Salinas extended his best wishes to His Majesty on behalf of President Benigno S. Aquino III, the Filipino nation and the over 50,000 overseas Filipino workers in Spain.

He expressed his sympathies to the victims and families of the recent earthquake in Lorca and relayed his gratitude and appreciation to the people of Spain for their invaluable humanitarian assistance to the Filipino evacuees from Libya during the recent crisis.

Ambassador Salinas also imparted his commitment to further develop trade and economic diplomacy between the Philippines and Spain, and to continue to promote a robust education and cultural exchange, highlighting 490 years of friendship and historical ties between the two countries.