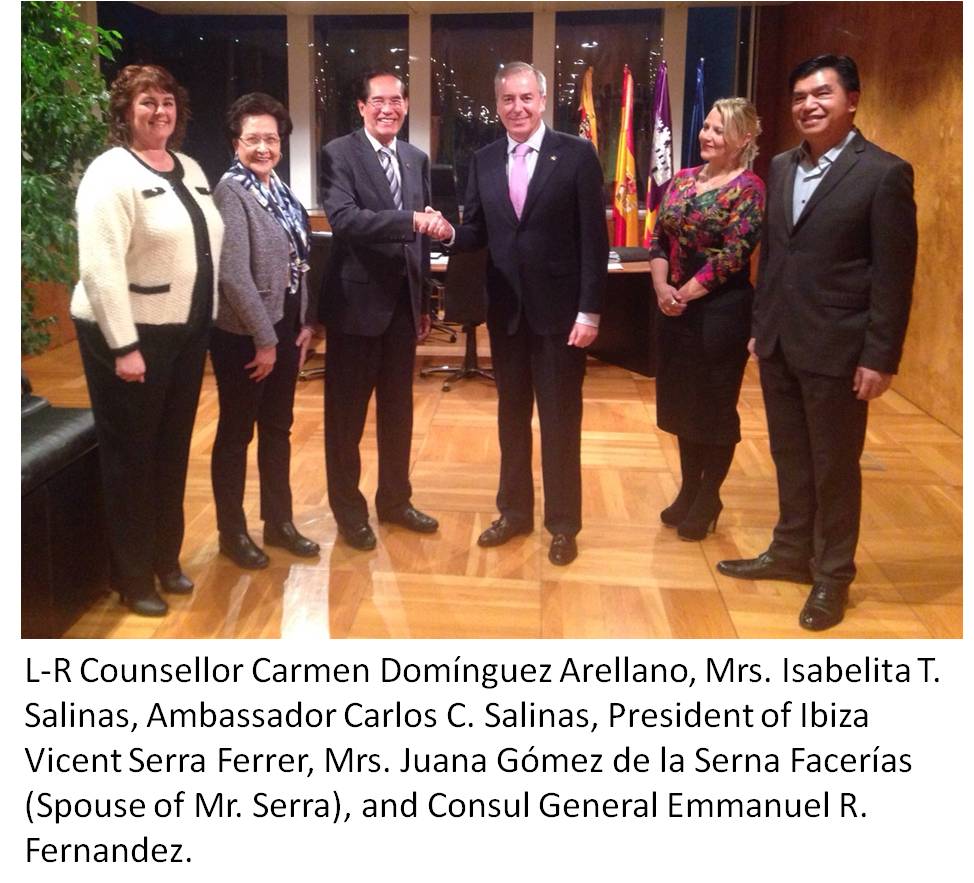 Philippine Ambassador to Spain, Carlos C. Salinas, met with the President of the Consell Insular de Ibiza, Vicent Serra Ferrer, at the latter’s office in Ibiza last November 15, on the sidelines of the Annual Ambassador’s Cup basketball tournament of Filipinos in Spain and Andorra.  During their meeting, Ambassador Salinas and President Serra talked about the status of Filipinos working in Ibiza and the possible areas of cooperation between the local government of Ibiza and the Philippines.  President Serra spoke very highly of Filipinos in Ibiza, even commenting that in his entire life he has never heard anything negative about Filipinos in Ibiza.  On the possible areas of cooperation that the local government of Ibiza and the Philippines could explore, the two officials discussed trade and tourism, cultural/educational exchanges, and film screenings. Madame Isabelita Salinas, Consul General Emmanuel R. Fernandez,  and key leaders of the Filipino community in Ibiza accompanied the Ambassador during the meeting; while President Serra was joined by his own spouse and Ms. Carmen Dominguez Arellano, the Consellera Executiva of the Departament de Participacio Ciutadona.

From the President’s office, Ambassador Salinas and company proceeded to the Convent of Santo Rosario where they met with the other leaders of the Filipino community Ibiza.  The following day (November 16), the Ambassador graced the Annual Ambassador’s Cup basketball tournament which was participated in by teams of selected Filipino players from Barcelona, Madrid, Ibiza, Andorra and Palma de Mallorca.  The Barcelona team garnered the top award, followed by the teams from Palma de Mallorca and Madrid.  In his remarks prior to giving out the awards, the Ambassador took the opportunity to talk about the ongoing I-Rehistro pilot program of COMELEC and urged everyone to register for the forthcoming national elections in 2016.

There are around 1,500 Filipinos working in Ibiza which is a world-renown tourist destination.   Most of these Filipinos work in bars and restaurants which are frequented by affluent tourists and showbiz personalities from around the world, especially in summertime.  A few others work as caretakers of villas owned by foreign nationals.  Filipinos in Ibiza are held in high esteem both by the locals and the tourists for their industry, their friendly disposition and their facility with the English language.