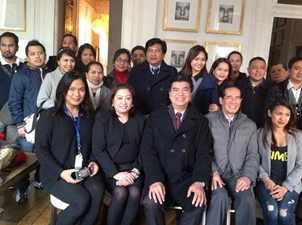 Ambassador Carlos C. Salinas and Consul General Emmanuel R. Fernandez held meetings with the leaders of Filcom organizations and representatives of Filipino businesses in Barcelona, Spain, last Sunday (25 January 2015) to discuss the latest developments in the Embassy and in the general, which impact the lives of Filipino nationals in Spain.   The two meetings were held at the premises of the Philippine Honorary Consulate General in Barcelona. 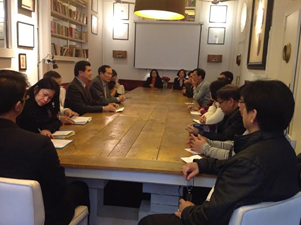 During both meetings, Ambassador Salinas informed the participants of the progress the Philippines has made in many areas, particularly in the area of economic development.  He cited the remarkable growth in investor confidence which the Philippines has gained as a result of the political and economic reforms undertaken by the Aquino administration.

Ambassador Salinas then urged the twenty Filcom leaders present to be a part of this ongoing progress by increasing their and their constituents’ participation in the country’s political processes.  In particular, he urged them to encourage as many Filipino nationals as they could to register as Overseas Voters so that they could participate in the national elections in 2016.  In like manner, Ambassador Salinas appealed to the twenty-three representatives of Filipino businesses in Barelona to extend their help in disseminating information regarding the ongoing Overseas Voters’ Registration, motivating Filipinos to actually register, and facilitating the registration process by, for instance, allocating a space and time in their business premises for Embassy personnel to conduct OV registration.

Consul General Fernandez then shared with both groups how Filcom leaders and business representatives in Madrid are currently collaborating with the Embassy in promoting Overseas Voters’ Registration.  Among other things, he talked about the popularity contest launched by the Embassy and the Filcom organizations in Madrid called the “Mutya at Lakan ng Filipinas-Espana 2015.”  He explained that every Filcom organization (either on its own or in conjunction with another organization) shall field a pair as its candidates for “Mutya” and “Lakan.” The winning pair shall be determined on the basis of the number of new Overseas Voters that each organization can help register. The winning pair shall be crowned during the Barrio Fiesta celebration which shall be held in Madrid on the last Sunday of June.  He also talked about the raffle draws that Filipino business establishments in Madrid have agreed to sponsor in order to encourage Filipino nationals to register.  New registrants shall be given tickets that will entitle them to be part of the monthly draws and the grand draw in October 2015.

Ambassador Salinas capped the two meetings with a reminder to the participants that if Filipinos want to help their country sustain the progress it has achieved, they should deepen their involvement in the country’s political processes — and the most direct and relevant way to do so is by participating in Overseas Voting.

The following day (January 26), Consul General Fernandez administered the Oath of Allegiance to fifty-three individuals who decided to reacquire their Filipino citizenship.   After explaining to them their rights and responsibilities, as well as their obligations and privileges as Dual Citizens, he encouraged them to get involved in the country’s life by registering as Overseas Voters and voting in the forthcoming elections in 2016.  Thirteen of them immediately registered as Overseas Voters, while the rest promised to do so at the soonest possible time.