Ambassador Carlos C. Salinas presenting his credentials to the Archbishop of Urgel

Philippine Ambassador Carlos C. Salinas presented credentials to the Co-Prince of the Principality of Andorra Archbishop of Urgell Joan Enric Vives I Sicilía today at the Palacio Episcopal in La Seu d´Urgell, Spain.

During his meeting with Archbishop Vives, Ambassador Salinas conveyed that he looked forward to improving and strengthening relations between the Philippines and Andorra during his tour of duty.  He also thanked Archbishop Vives for Andorra´s support of the country´s international candidatures and the warm welcome and fair treatment accorded to Filipinos in Andorra.

For his part, Archbishop Vives looked forward to working with Ambassador Salinas in achieving a stronger Philippines-Andorra partnership and informed the latter of the presence of four (4) Filipino seminarians in his seminary.

Ambassador Salinas again expressed his appreciation for the kind treatment and excellent working conditions that the Andorran Government has accorded to the estimated 1000 Filipinos who live and work in Andorra in his meeting with FM Saboya.  He also took the opportunity to explore new areas of cooperation with Andorra particularly in trade and tourism.

During Ambassador Salinas´ meeting with Andorra la Vella Mayor Rosa Ferrer, he informed her that the Embassy has lined up a number of Rizal-related activities in Andorra since this year the Philippines is celebrating the 150th anniversary of Dr. Jose Rizal´s birth.  Mayor Ferrer, for her part expressed the city government´s full support for said activities and mentioned the possibility of holding them in September 2011.

Ambassador Salinas, together with Mrs. Isabelita Tanseco Salinas, also met with FILAND President Bong Canlas and the members of his association.  He informed them of the Embassy´s planned activities in Andorra for 2011.  Mr. Canlas pledged the full support of the Filipino community in Andorra for the said activities.

Under Andorra´s Constitution, the Head of State are the two (2) co-Princes, namely the President of France and the Bishop of Urgel of Spain, while the Head of Government is the Executive Council President. 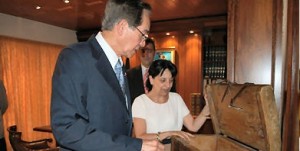 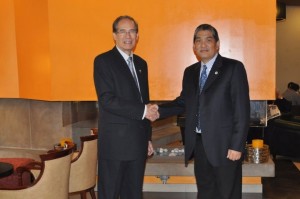