Ambassador Carlos C. Salinas Leads Wreath-Laying Ceremony in Observance of the 152nd Anniversary of the Birth of Jose Rizal 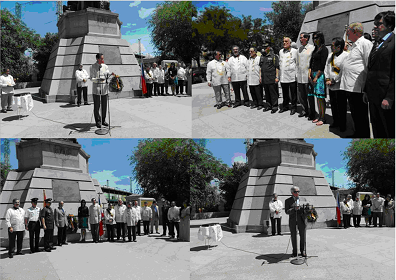 24 June 2013 – The Philippine Embassy in Madrid reported that Philippine Ambassador to Spain Carlos C. Salinas, together with Senator Pia S. Cayetano, and Knights of Rizal Madrid Chapter (KRMC) Commander Federico Sanchez Aguilar, led the Officers and Staff of the Embassy, members of the KRMC, and the Filipino community in Madrid in a solemn wreath-laying ceremony on 23 June 2013 at the Rizal Monument in Avenida Islas Filipinas in Madrid in observance of the 152nd Anniversary of the Birth of Dr. Jose Rizal. 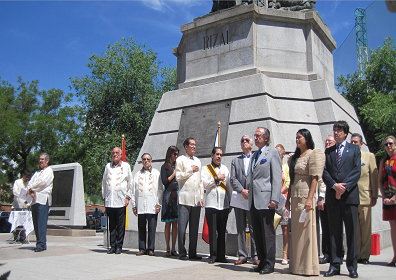 In his speech, KRMC Commander Sanchez noted the works of Rizal, including his writings and his advocacy of peaceful means for achieving political reforms during his time.  He also outlined some of the projects of the KRMC, including working towards the naming of street in Vallecas, Madrid after Sitio de Baler and a forthcoming symposium on Rizal in late September.

Ambassador Carlos C. Salinas closed the ceremony with a brief message emphasizing that Rizal and the lessons from his life remain current and contemporary.  He mentioned that in remembering Rizal people honor, not just the man, but the ideals that he championed – courage, idealism, and resolve.  Ambassador Salinas extolled everyone present to “remember to tap into our inner Rizal, to take the lead of the youth in which he had utmost faith. It is not the wreath that we lay at the hero’s feet that honors him but rather, it is our hope.