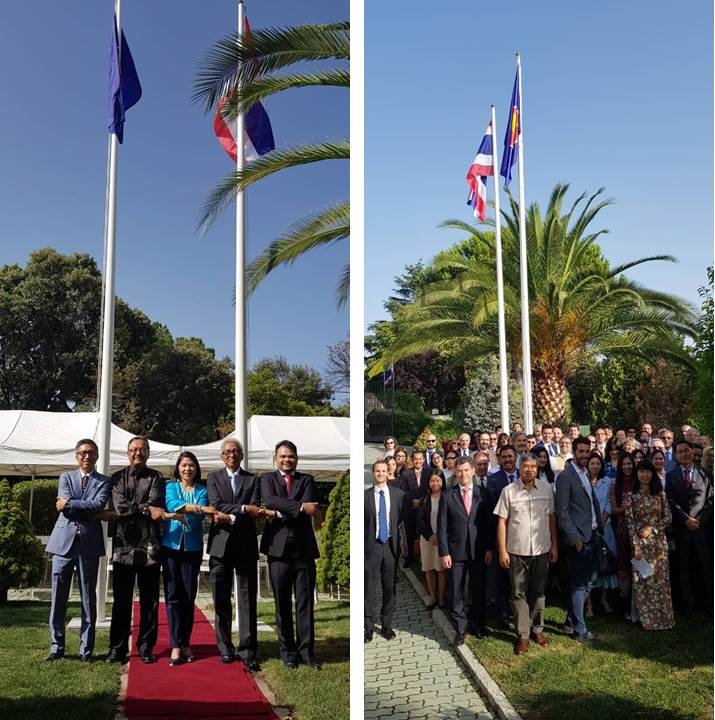 The Ambassadors and Chargés d’Affaires of the five resident ASEAN Embassies in Madrid commemorate ASEAN Day 2018 with a flag-raising ceremony and reception, accompanied by Embassy personnel, members of the ASEAN community, and Spanish business sector representatives.

The Philippine Embassy in Madrid participated in the annual commemoration of ASEAN Day on 8 August, in a ceremony hosted by H.E. Rattikul Chansuriya, Ambassador of Thailand and current chair of the ASEAN Committee in Madrid (ACM).

In attendance at the event were the resident ASEAN Ambassadors in Spain (Indonesia, Malaysia, Thailand, and Vietnam), along with prominent members of the ASEAN community and business sector. The Philippine Embassy’s participation was led by Chargé d’Affaires, a.i. Ralf G. Roldan.

The ASEAN Day celebration was marked by a flag-raising ceremony and the playing of the ASEAN anthem. This was followed by a reception for the guests on the lawn of the residence.

After the reception, the assembled Ambassadors held their regular ACM meeting, in which they discussed preparations for future events to promote ASEAN.

The ACM, which is composed of the resident Ambassadors of Indonesia, Malaysia, the Philippines, Thailand, and Vietnam, works together to organize joint events to raise the awareness of ASEAN in Spain.