Bust of Jose Rizal as Writer and Poet, Unveiled in Malaga 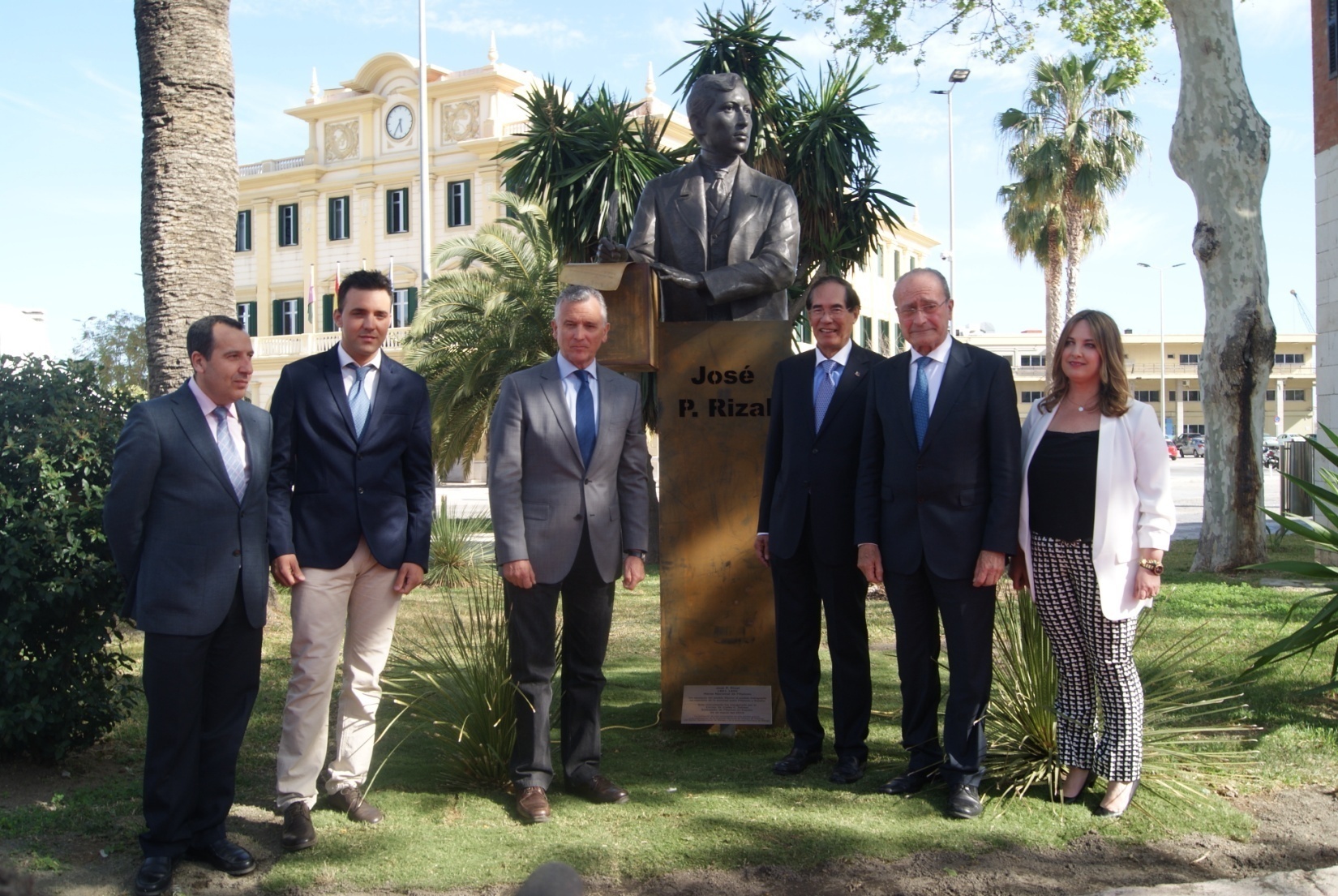 A new monument in honor of Dr. Jose Rizal was installed in the city of Malaga on 30 March 2016. It is visibly located along the Paseo Marítimo which is situated in the heart of Malaga. Facing the monument is a main busy street, while the Instituto de Estudios Portuarios is located behind the monument. The place of the bust will easily be seen and visited by both local and tourist passers-by.

The Philippine Embassy in Madrid, in close coordination with the Philippine Honorary Consulate Office in Malaga, and the National Historical Commission of the Philippines, successfully completed this project which was first brought up during the Philippine Independence Day celebration in Marbella in 2015.  The design of the said bust is the first monument in Spain and in Andorra to present Rizal as a writer and a poet. The bust, which measures 100 centimeters in height, is mounted on top of a 180 centimeter-long pedestal. Rizal holds a pen and a paper as he writes on a desk. Inscribed on the paper were a few lines from “Mi Último Adiós”, and the inscription on the marker says “A gift of the Filipino people to the Malagueño people in honor of the friendship between the Philippines and Spain”.

The program for the bust inauguration started with the national anthems of the Philippines and Spain, followed by the unveiling of the bust, singing of Bayan Ko, speeches by Philippine Honorary Consular Officer Rosa Agüera, Representative of the Government of Andalucía José Luis Ruiz Espejo, President of the Port Authority of Malaga Paulino Plata Cánovas, Malaga Mayor Francisco de la Torre Prados, and Ambassador Carlos C. Salinas.

The Spanish officials unanimously agree in their speeches that the unveiling of the monument is a tribute to Jose Rizal and at the same time, a celebration of a shared heritage and a symbol of the story of friendship between Spain and the Philippines, immortalizing the noble ideals by which he swore – national pride, courage, and dignity. It also speaks about the relationship between the Filipinos and Malagueños which can be traced back to the siege of Baler wherein Juan Chamizo, a Malagueño soldier, was among the 33 Spanish soldiers who survived the 11-month long siege in the church of Baler for defending their flag and who were considered friends of the Philippines and not enemies, and were given the necessary safe conduct passes to return to Spain through a decree issued by President Emilio Aguinaldo. The bust can be considered as another gift of the Filipino people to the people of Malaga in recognition of the relationship that exists between the two peoples. The location of the bust also speaks about the importance of the ocean, sea and the maritime field in the history between the two countries.

Ambassador Salinas in his speech highlighted the fact that the literary works of Rizal have made a great impact on the history of the country and its people, and up to this time, his writings continue to inspire their readers to love their respective countries. He also reminded the young Filipinos present in the event to “know that there runs within each of them a fiber of the threads from which the fabric of Rizal’s character was woven. Anyone aspiring to make a difference in the world, even if only by being the best version of himself, is building a monument to Dr. Jose Rizal.” Ambassador Salinas expressed gratitude to the government of Malaga and Andalucia for this tribute to the Filipino people by allowing the establishment of a monument of Jose Rizal and for giving one of the best sites in the city to honor our national hero.

The bronze bust was designed by a Malagueño, Juan Vega, and was funded by the National Historical Commission of the Philippines.

Various government officials, members of the Filipino Community in Malaga, and local journalists graced the event.