Posted on 02/11/2010
Chargé d’Affaires, a.i. to Spain, Celia Anna M. Feria, reported to the Department that Senator Edgardo J. Angara was awarded the VII Premio Casa Asia (7th Casa Asia Award) in recognition of his contributions in strengthening relations between the Philippines and Spain on 2 November 2010 in Madrid.
This award has two categories – institutional and individual.  The institutional category was awarded to the International Dunhuang Project (IDP), an international collaboration to make information and images of all manuscripts, paintings, textiles and artefacts from Dunhuang and other archaeological sites of the Eastern Silk Road freely available on the internet.  Ms. Susan Whitfield, Executive Director of IDP, received the Award on behalf of said organization.

The individual category acknowledges the work of Senator Angara in enhancing the bilateral relations between our two countries particularly by authoring the law declaring 30 June of every year Philippine Spanish Friendship Day and through his involvement in preserving and promoting the history of the Siege of Baler, his birthplace.

Senator Miguel Zubiri attended the awarding ceremonies along with Mrs. Gloria Angara and Ms. Anna Angara, the Senator’s wife and daughter, respectively, as well as officers and staff of the Philippine Embassy in Madrid and members of the Filipino community in Madrid. 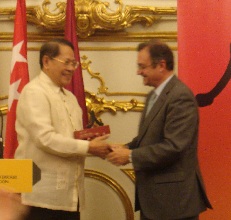 Senator Angara and Senator Miguel Zubiri with Ms. Telma Ortiz, Deputy Director of the Department of International Relations of the Barcelona City Council and sister of Princess Letizia of Spain, at the awarding ceremonies.