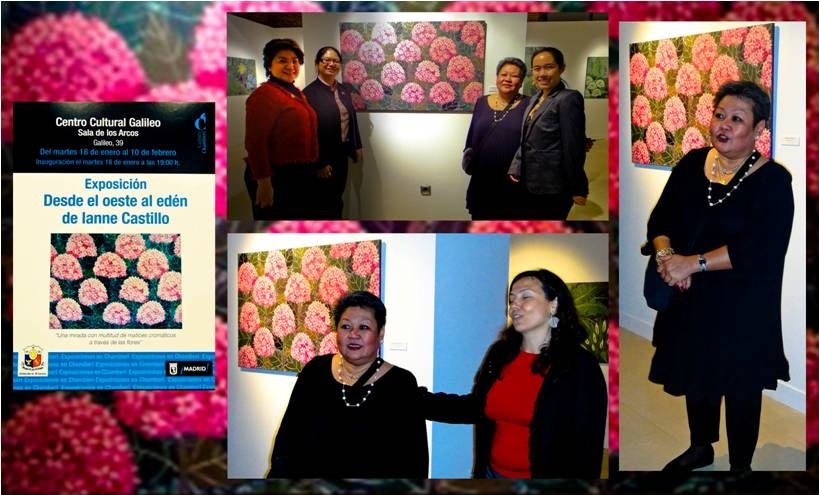 Pictures of the Art Exhibit Opening of Ms. Ianne Castillo at the Centro Cultural Galileo

The Philippine Embassy in Madrid helped organize the art exhibit opening of Madrid-based Filipina painter Ianne Castillo at the Centro Cultural Galileo in Madrid on January 18.

Entitled “Desde el Oeste al Edén – Una mirada con Multitud de Matices Cromáticos a través de las Flores” (From the West to Eden – A view of the many chromatic shades through flowers), the exhibit will run from January 18 to February 10.

It features Ms. Castillo´s trademark paintings of flowers and plants, including her popular rendition of pink and purple hortensias (hydrangeas).

The Filipina painter has showcased her work in various places around the world including the United Nations in New York, the Schevenhagen Gallery in the Netherlands, the Ayala Museum in Manila, Casa de America and the Fundación Gregorio Sánchez in Madrid.

The Centro Cultural Galileo is a venue solely devoted to the promotion of culture and the arts in the Chamberi District of Madrid.

Film showings, art exhibitions, poetry readings, and even theater productions of important artists from Spain and around the world are regularly held there.